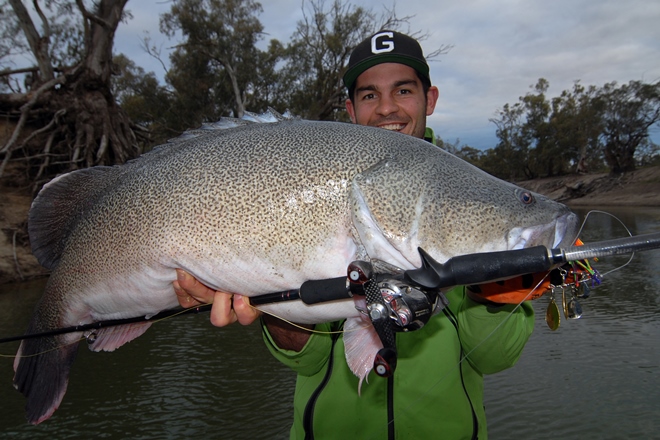 Dean Norbiato with a cod taken on the 4x4 spinnerbait.

AS anglers, how often do we think we have it all worked out, only to find that a slight spin on an old lure paves a new direction.

Over the years, I have watched spinnerbaits evolve into some of the most effective lures for targeting Murray cod and other native fish. Their variants and applications number almost as many as the overnight pariahs who have appeared en masse to create a jumble of different makes and models on the market. It’s confusing to say the least but I have opted to follow those brands that have held fast and evolved through product use and a good understanding of the fish they are being built for.

How do you design and build specific lures for something you don’t understand? It’s a fair question and one that is asked more often by thinking anglers who measure success on the effective nature and strength of what it is they are throwing at fish. This is especially true when it comes to large Murray cod. One spinnerbait model cannot service every on-water scenario and therefore we have several favourites and use them in accordance with the conditions we are faced with.

Over the past couple of seasons we have had a great deal of success using a spinnerbait that is not so much a new model but one that has been tinkered with to perform at a much better level. The Bassman Spinnerbaits 4×4 has always been a lure of interest to me but its availability has been hampered by its creator’s pedantic nature to improve a lure he was not fully happy with. In an explosion of thinners-induced enlightenment, the swivel-clad arms were re-hung with four glistening blades and the package was sent for testing. And test we did, as cod after cod climbed all over the rotating meal of whirring metal.

On the old models, only the top two blades would spin as the lower blades were fixed in place. On the new model, all four blades are hinged on swivels and they are all able to rotate, creating maximum flash as the spinnerbait is drawn through the water. Not much difference you might think, and if that’s the case then you too are a prime candidate to join the jumble of spinnerbait creators who don’t fully understand how they work. Besides the four rotating blades providing more flash to catch predatory eyes, they also work in unison to generate additional water disturbance.

This in turn creates more pulse, which is just one of many attractants detected by the lateral line on large fish such as Murray cod. Then there is the lift to consider, as four rotating blades now catch almost double the water. This then allows the spinnerbait to all but hover during the slowest of retrieves. And last but not least, this additional lift provides the spinnerbait with an extra element of snag-proofing.

You might wonder how two tiny swivels can have such a huge impact on a single lure, but these subtleties are what align artisans, anglers and cunning fish. The finished product is a shallow-water cod lolly that has all the bells and whistles to tempt large predators and the required attributes that now have its designer content with its finish. I might add it has not made these lures any easier to acquire, as every man and his dog has realised the fish-catching ability they provide. During the initial testing period, we took to fishing water depths of 4m and less with minimal flow. We did this not by chance but because that’s exactly what the lure is designed for.

Our first solid cod came on the drop as the blades faded from sight in relatively clear water. Almost at full depth, the strike transmitted up the line to hand, jarring the senses as the rod loaded to the cork under the power of one very feisty green fish. With its head turned, the fish was slowly worked back to the boat. When the cod finally breached, there was no sign of the lure that had been all but ingested. This is common of strikes on the drop where a cod rises to meet an easy meal that’s usually inhaled deep. At more than a metre in length, it was not a bad first catch on the new and improved 4×4 spinnerbait.

Over the next few trips, the true worth of this flashy lure was to uncover a number of big fish we had overlooked in our haste to target what we considered better water. We had now nailed a string of solid Murray cod on the cast and these lures had fast-tracked their way into the top of the box for most shallow-water sojourns. On the next trip out, with nothing more than an electric motor to power the boat along, we started trolling the shallower stretches of a river between holes. As we had to navigate these runs anyway, why not do so at a leisurely pace with a spinnerbait in tow. 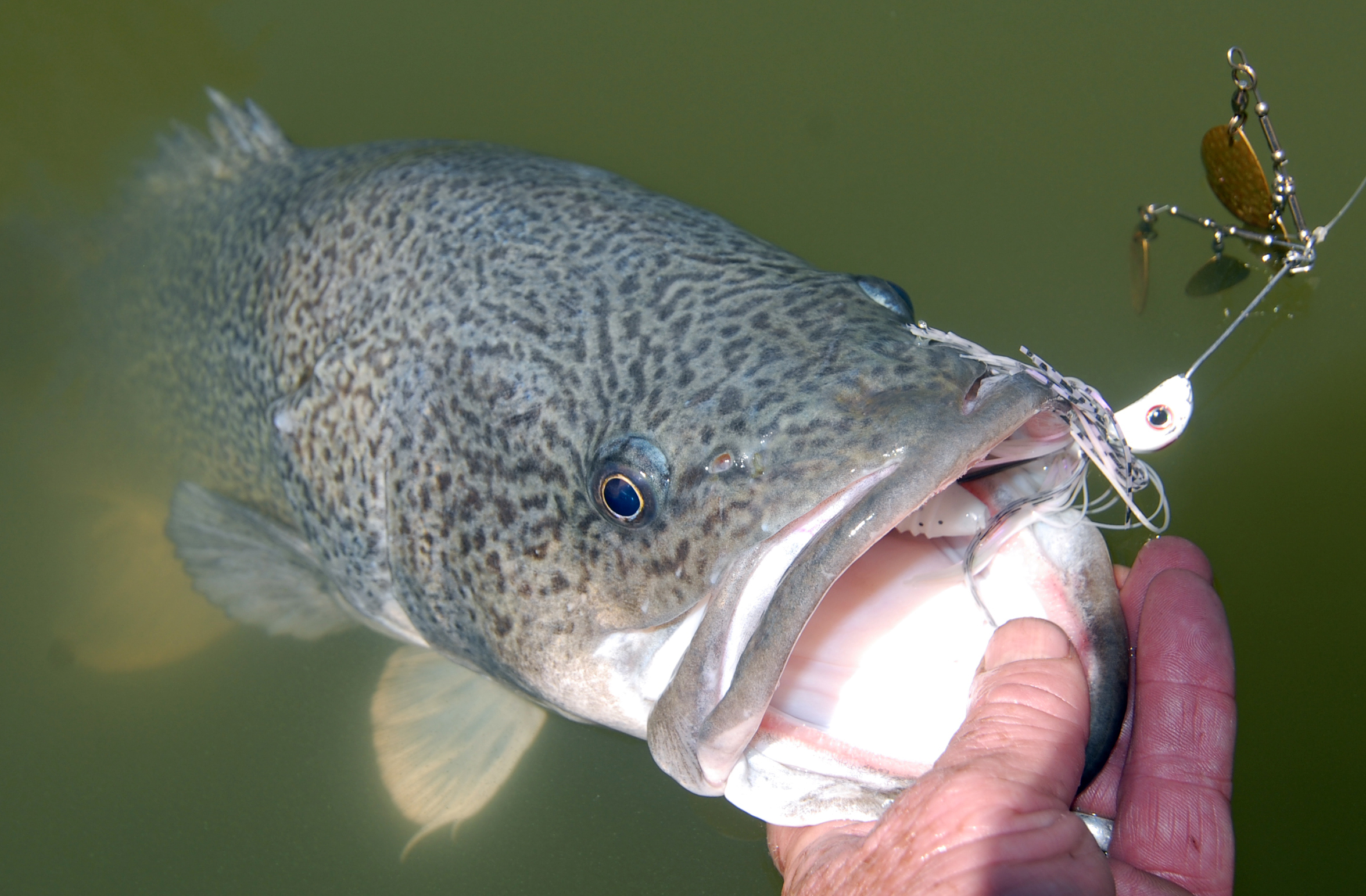 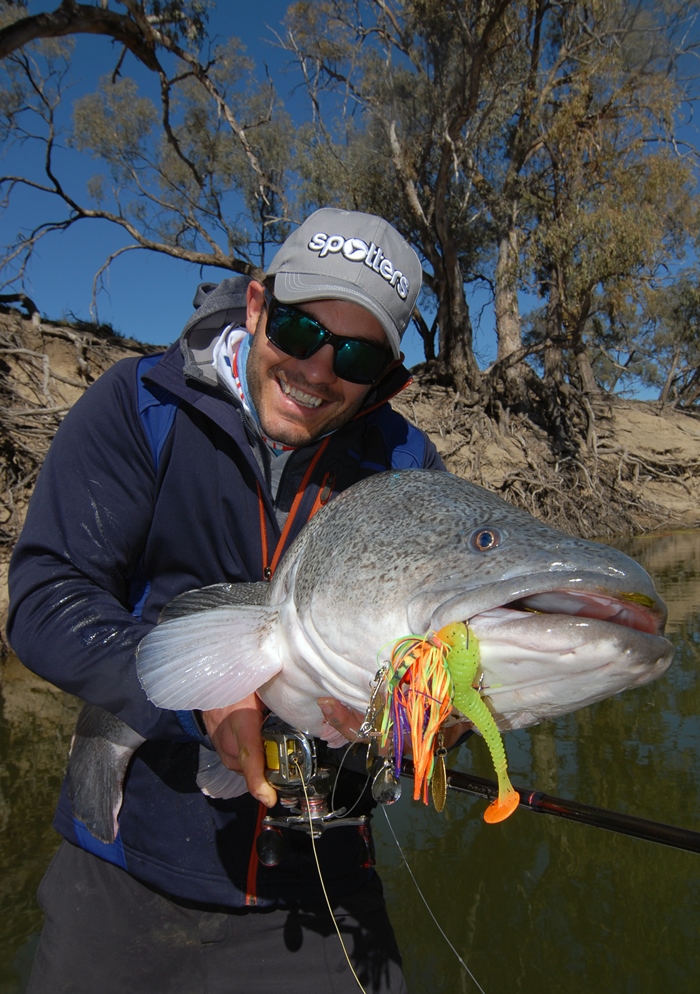 We had travelled only a short distance when the first strike hit the lure like a stray bullet, the rod tip cracking hard on the side of the boat as it loaded up solidly. In less than 2m of water, we would no doubt have driven over this fish dozens of times during the season and not had a clue it was hiding below. With a long straight ahead, we wondered how many opportunities we might get or whether that first fish on the troll may have just been luck. It didn’t take long to get the answer because the boat had hardly got under way before the second fish hit home. With another solid Murray cod on board, it was grins all round at the newfound opportunities these flashing lures presented.

On this particular trip I was fishing with fellow cod enthusiast Dean Norbiato who had to catch a flight out later that afternoon. Cod after cod smashed the blades on the troll and while the odd fish hit mine, Dean’s lure was attracting more attention than a prawn at a seagull fest. As the afternoon wore on, it became clear that in order to get back in time for Dean to catch his flight we were going to have to take the lures out of the water. Such was the bite, we had racked up more than a dozen chunky cod and it was only getting better.

Under the low hum of the electric, we made camp, packed up and hit the airport with 15 minutes to spare. At departures, Dean was greeted by a less than impressed ticket puncher. Yes, we had cut it fine but it was well worth the scorn in order to have experienced one of the hottest cod bites either of us had seen.

From what I have learnt these past few seasons, the marginal waters of rivers and lakes are home to some true monster cod. Such places are often overlooked and rarely fished other than during periods of low light, when surface lures come into their own. In the case of where we were fishing, sporadic hidden bumps and snags went unseen but all held fish in seemingly barren shallow stretches of river.

Suitable locations for this style of spinnerbait are many and as I think about it, this flashing lure would be at home among weed beds and out on the shallow flats. It could also be worked just under the surface at these locations during periods of low light. The 4×4 would also hold its own in many of the inland dams and impoundments. Copeton, Blowering and Eildon dams would be prime locations for this lure, especially when worked atop the weed beds when the water rises. With a good presence in terms of size, the 4×4 would no doubt tempt some of the monster cod that skulk these waters.

In fishing, it’s often the small things that make a big difference. In this case, it took but a hint of thinners and two small swivels to provide angling opportunity. I for one can’t wait to see the next new thing, whether it be an improvement on the old or something off the cuff, it’s all part of forging new ground and the means to some of angling’s finer moments.

As we continued to fish the 4×4 spinnerbaits this past season, we began to experiment with dipping the tails on our soft plastics in a plastic worm dye. This acts to provide fish a tight focal point or hot spot to home in on. We noticed the difference straight away as the strike rate increased on the dipped lures as opposed to those left a natural colour. To the angling eye, the brilliant fluoro spot becomes a visual drawcard as it paddles flat out behind the parade of flashing blades. It seems most fish are caught in its rhythmic spell and with a range of different colours to choose from, there is sure to be a favourite colour for every species. Some dyes are also scented, adding another dimension to the fishing equation.