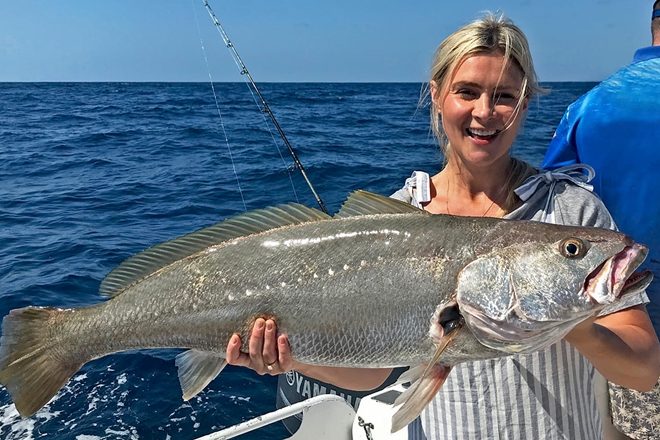 With the current fairly slow at the moment, bottom bashing is very easy and fish like this can be caught. (All photos supplied by fishingnoosa.com.au)

Excellent weather for an offshore trip

Offshore has been a mixed bag of success this week as the winds persist and the swell has been up on the Noosa Bar. The estuaries have also seen a change following the previous weeks rain and even the freshwater is warming up.

Starting offshore there was a weather window for bigger boats on Thursday which saw boat ramps chokka block full by 7am. The light winds and cleaner swell made for an easier crossing for more experienced boaties. With most anglers searching for the first mackerel of the season halls reef, sunshine reef and North Reef were the popular places. Although no mackerel were caught there were good numbers of smaller jewfish around the 80-90 cm mark, tuskies, mack tuna and sweetlip. While waiting for the mackerel make sure you have a small length of single strand wire above your hooks to prevent bite offs. Take a look at the mason single strand and ask us about haywire twists.

Beach Fishing continues to fish well for bread and butter species. Small dart are all along the coastline with a few tailor and bream in the mix. Summer whiting are starting to show up in greater numbers and nothing beats a live worm so be sure to grab a pack on your next visit along with some whiting tube and red beads for added attraction.

Noosa River is coming toward a great week ahead with the moon phase. The recent Northerly winds have warmed the water up a bit more which has seen mangrove jacks becoming more frequent. Other fish becoming active are flathead. The recent influx of whiting has seen a few bigger fish following them into the sand flats. Flatties can be found throughout the Noosa River but the Frying Pan, Dog Beach and Weyba are the favourites. Try the small Molix shads if wanting to throw something bigger which will cover you for flathead and jacks. These bigger jointed baits work very well, especially at night because of the vibration they create. Jack fishing can be done at nigt in the same places that flathead frequent as jacks go out onto open water to hunt. Big eye trevally will also be on the hunt in packs and small Zerek poparazzi poppers cast out with a quick popping retrieve works best to trigger the bite. Upriver between the lakes you can find small undersized jewfish. These fish will take a range of bait and lures and they love a soft vibe like the Samaki range which come rigged and ready to fish out of the box. Throw these around more open areas and work the bottom few feet and expect to catch a wide range of other species too.

Freshwater has been quieter this week but with the lead up to the moon and warmer waters now is the time to break out small surface frogs like Zman finesse frogz and Chasebaits frog. Cast these onto lilies or the gentle sloping bank and twitch these slowly into open water. Be sure to put in plenty of pauses as bass love to hit a paused lure. As the sun rises switching to smaller jerkbait like the Bassday Sugadeep which is a personal favourite has secured many solid fish just sitting in the shade of an overhanging tree and bush. Be quiet on the water and enjoy the warmer weeks ahead as it will be a great time to start getting fish off the top.

Don’t forget when in store to ask about our Suzuki 4 stroke outboard motor giveaway!