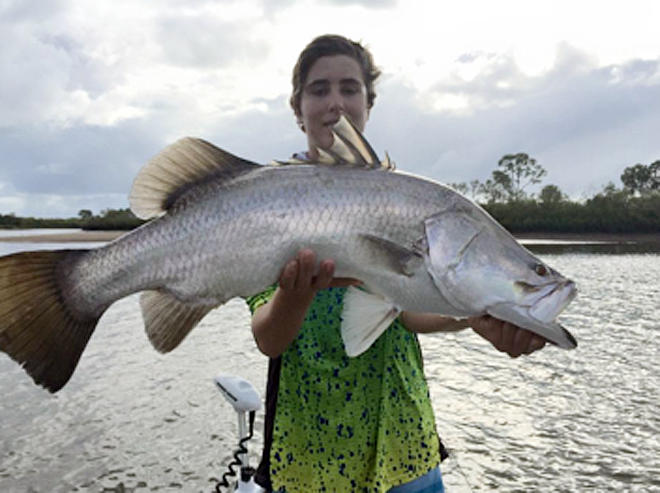 Matt Horvath with an 85mm barra caught in the Kolan River.

A great time of year for fishing

Isn’t it great that the temperature around Bundy has just started to cool down due to the south-esterlys blowing. This is generally a great time of the year with the cooler nights making it easier to sleep as well as making the more wintery species such as bream more aggressive and easier to catch.

During the past week there has been some excellent catches in the Burnett River with yellowfin and black bream being caught in good numbers. Kirby’s Wall, Fairymead Bend and the North Wall have been three hot spots lately.

There has also been some quality blue salmon up to 80cm back in the river. The big whiting that we experienced a few weeks back are still around with most anglers who are targeting them, doing well with fresh yabbies.

At night in the town reach, the tarpon and small trevally have been schooled up smashing baitfish. These can be caught by using soft plastics and small metal blades. Once you work out what the fish are biting on, they can be fantastic fun.

Young Tackle World staff members, Mitchell and Matthew had a good session fishing in the local rivers around Bundy last weekend. The boys were targeting mangrove jack and barramundi using suspending hard body lures, 4” Z-Man soft plastics and Zerek live shrimps. Most of the action started around the bottom of the tide and the first hour of the run in with some nice fish landed.

Good numbers of flathead and grunter are back in the Kolan with the Gulp 4” swimming mullet still performing very well.

Hopefully the weather will hold up to allow those with larger boats a chance to head offshore and get stuck into some good fish. With the smaller tides this weekend, it should make it easier to fish the reef with smaller weights. Spanish mackerel are still biting well with the 5-degree patch being one of the most productive. So let’s hope the weather plays the game and anglers can catch a good feed.

On the freshwater scene, Lake Gregory is starting to bounce back well. Round three of the Bass Electric Series is on May 3, at the dam from 7am to 1pm. This is a great little comp, so either join up or come out and support our local anglers next Sunday.

Lake Monduran has fished well all last week. Barra have been very active cruising up over the shallows. Barra from 45cm to 1 metre have been hooked in this fantastic dam. The barra are averaging around 90cm and becoming very challenging to land once hooked in heavily timbered areas. So ensure your tackle is up to scratch and have a great weekend.