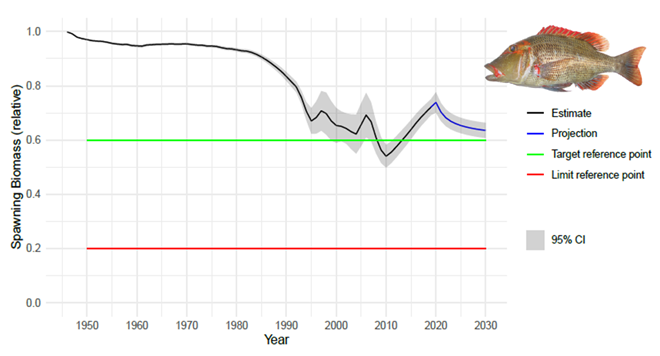 The base case model predicted spawning stock biomass declined between 1945 and 2012 to 54% unfished biomass. In 2020, the stock level was estimated to be 72% unfished total biomass (Figure 3.16).

Biomass of redthroat emperor at a healthy level 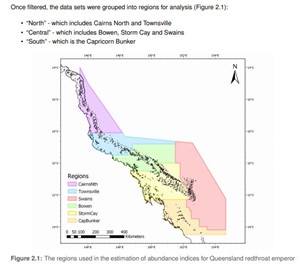 The latest stock assessment of redthroat emperor (Lethrinus miniatus) has estimated the spawning biomass of the population to be 72 percent and at healthy levels.

The spawning biomass is the total weight of fish that have reached sexual maturity and are capable of reproducing. The stock assessment uses a mathematical model to estimate the biomass—based on data from commercial logbooks, charter logbooks, statewide recreational fishing surveys, biological data from Fisheries Queensland and James Cook University.

The biomass estimates are used to determine the status of the stock and how we can ensure stocks are above the Sustainable Fisheries Strategy target of 60 percent unfished spawning biomass. Harvest targets have been calculated to maintain spawning biomass at the 60% target reference point for the base model, and a number of sensitivity test models, resulting in recommended biological harvests (RBHs) of 930 t (base), 485 t (low), and 1709 t (high). These RBHs are the first in a schedule of projected recommended harvests for the Harvest Strategy 2017–2027, using the 20:60:60 harvest control rule with a 0.87 buffer.

Redthroat emperor were targeted by markedly more fishers between 1998 and 2004 when there were higher number of operators in the fishery. After the Reef Line Fishery restructured and moved to quota management in 2004, harvests dropped significantly due to a number of factors: licence numbers able to catch reef line species were reduced considerably, there was a Commonwealth buyout as a result of the Representative Area Program, and industry focused their catches on the higher value species coral trout (Little et al. 2009).
This assessment estimated an increase in biomass after 2007. The results also suggest that harvest levels during the late 1990s and early 2000s were higher than would be consistent with a 60% target reference point. Management reforms enacted in 2004 (whether the Representative Area Program rezoning or the influence of the total allowable commercial catch administered through individual transferable quotas, or both) appear to have reduced fishing mortality to above target levels.
CLICK HERE – For the full stock assessment of the Queensland east coast redthroat emperor.