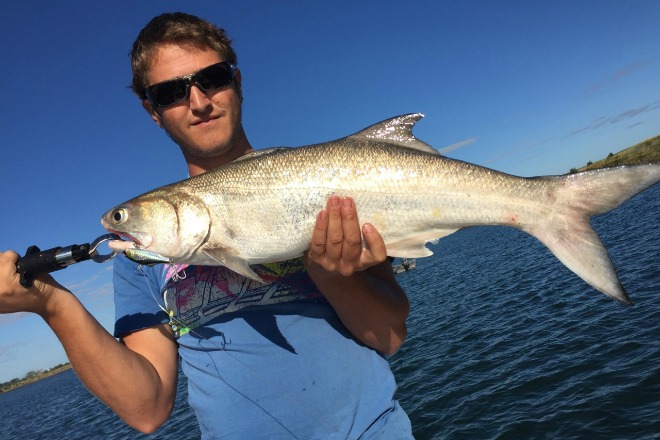 Kain Taylor with the blue salmon he caught in the Burnett River recently.

A few chilly mornings were a shock to the system.  Now things have settled, it really is a magic time of the year to live around Bundy.

This weekend there will be slightly larger tides with the full moon falling on Sunday night. Unfortunately at this stage the winds are expected to pick up over the weekend, restricting the fishing back to our rivers and impoundments.

Over the past week the Burnett has been fishing very well.  The exciting news is that good numbers of blue salmon up to 95cm have been smashing lures and baits.  These salmon are masters at throwing hooks, usually right beside the boat and fishing a slightly softer drag might be something to consider.

Thegrunter and flathead have also been on fire.  The flathead seem to be right through the Burnett at the moment and soft plastics such as the Berkley Gulp 4” Swimming Mullet or any of the Prawn Imation lures are working well.

Grunter to 50cm have been caught on fresh baits but sporting anglers have been doing well with small metal vibes and soft plastics.  Quite a few salmon have been hooked by anglers chasing the grunter.

Already the size and quality of the bream in the Burnett is outstanding.  The recent cold snap has fired up a few massive bream.  At this stage, with all the bait in the river it’s shaping up to be a tremendous bream season.

As I mentioned earlier, the full moon is on Sunday night and Lake Monduran might be well worth a visit.  The barramundi seem to be back up on the shallows in big numbers.


The largest barramundi I’ve heard of this week was at 108cm, caught on a suspending hard body lure.  Pulse Vibes have also been very successful on barra and bass worked much closer to the bottom.