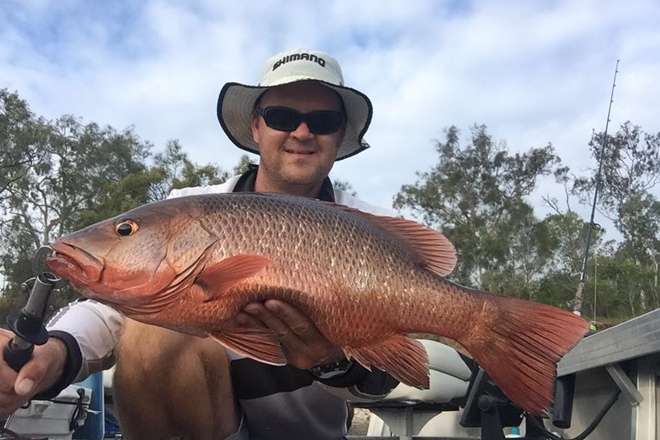 Brett Morgan with a nice 56cm mangrove jack he caught during the warm weather this week.

This week around the Bundaberg area we finally had a break in the weather and it was awesome to see the bigger boats get out and take advantage of the good conditions.

Although there was a lot of run due to the full moon on Thursday night, most boats still managed to land some fantastic fish, including coral trout, red emperor, sweetlip, cod, parrot and spanish mackerel.

Back in our rivers and creeks, mangrove jack up to 56cm have been producing plenty of entertainment for anglers chasing these hard-fighting summer sports fish.

The jack have been responding well to both lures and live or strip baits.  One of the best soft plastics for mangrove jack this past week has been the 4” Paddletail by Chasebait.  These can be rigged on a conventional jighead or weedless, depending on the structure you’re fishing.

Another species that has fired up with the bigger tides and the full moon has been the summer whiting.  The best bait has been fresh yabbies and beach worms fished around the many sand bars in all our local rivers.

At this time of the year we normally see quite a few nice dart and whiting starting to show up along our coastline, with Coonarr Beach fishing well at the moment.

Once again, Lake Monduran’s small barra have been very active this week.  A lot of these barra have been caught using surface poppers early around the massive amount of lilies and weed edges.  As the day heats up, try throwing suspending hard body lures and soft plastics around the shallow points and in the backs of the windward bays.

Just finally, good luck to all the anglers fishing the Basstastic Barra Tournament at Lake Awoonga this weekend.