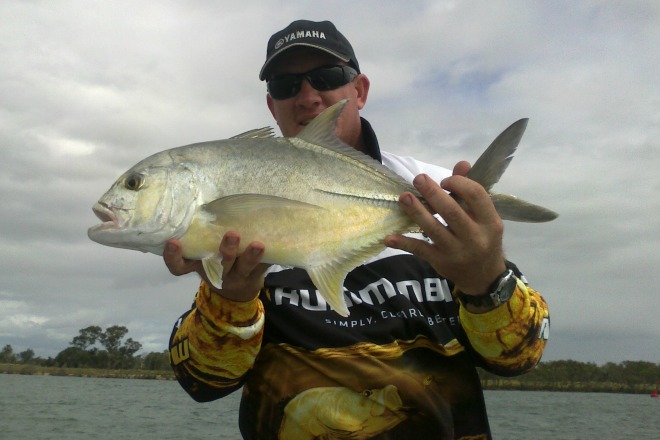 Dale Smith with the trevally he caught in the Burnett River recently.

Bream and Barra around Bundaberg in June 2016

The rain was fantastic but the wild winds caused a little damage with some trees down and it also flattened some of the local sugar cane crops. Let’s hope it stays dry for the start of the crushing which is due to kick off in the next few weeks.

All of our local rivers are running a little dirty due to the rainfall last week. Some of the best fishing should be around all of the river mouths in the cleaner water.

Good numbers of school and grey mackerel are still right along our coastline. Anglers have had good results either casting or trolling metal vibes and spoons around the mouths of the Burnett and Elliott rivers when the weather permits.

The latest flow of fresh should stir up a few muddies so it will definitely be worth dusting off the pots to try to catch a feed. I’ve heard a few prawns are being caught in the Kolan and Burnett with the deeper holes holding better numbers.

Now we are into the first week of winter, the quality of the bream being caught has been very impressive. Bream up to 45cm have been common and areas such as the North Wall are well worth a crack. Some of the best baits for these big bream have been strips of mullet fillets or fresh peeled prawns.

We are all predicting a heap of massive bream will be weighed in at this year’s VMR Family Fishing Classic on the 24th, 25th and 26th of June.

Although we are in the first week of winter, the amount of barra being caught at Lake Monduran is awesome. The smaller class of barra between 45cm and 50cm have been very aggressive, smashing suspending hard body and soft vibe-style lures.

I did hear that one of the local charter operators had a top session last weekend boating eight barra and dropping around another ten barra for the morning session. The water temperature is still in the low twenties, so this action should continue over the next few weeks.