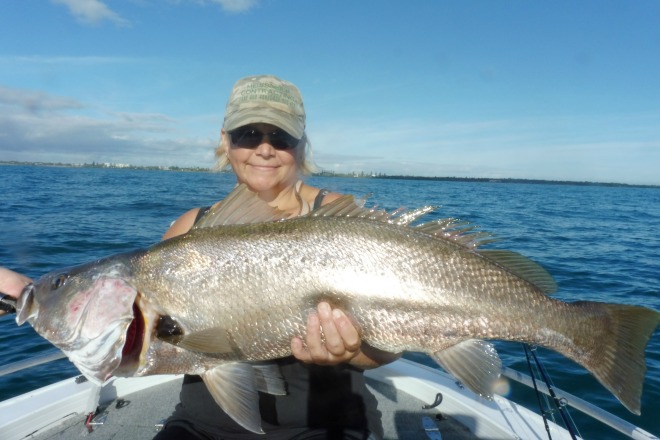 Cindy Meissner with a jew she caught off Burnett Heads on her first ever attempt at micro-jigging.

IT seems that the weather patterns around Bundaberg are starting to settle as the cooler months approach.

With the light winds we’ve had over the past two weekends, this one’s shaping up similar but keep an eye on the local forecast and play it safe on the water as things can change.

With all the good weather, a lot of the action has been on our inshore reefs. Even the smaller boats have been getting into the mackerel that seem to be in big numbers right along our coastline.

School mackerel and massive Spanish mackerel have been holding on any structure and are biting well on floating pilchards and gar. Live baits have been very effective, also getting smashed as the pelagic species move through.

A few schools of tuna have been mixed through the mackerel. The tuna are also fantastic fun to catch, either by casting small metal slugs or by trolling hard body lures through the schools.

Good reports have come in from land-based anglers on the Burnett River. Kirby’s Wall has produced some nice bream, whiting, trumpeter and flathead this past week. Anglers using soft plastics and fresh baits rigged as lightly as possible have been catching the better fish.

Good reports have come in from the Kolan River also this week. This is prime time to target big summer whiting and flathead around the many sand bars. The water temperature is still warm enough and quite a few mangrove jack and the odd barramundi have been caught around the rock bars.

Lake Gregory and Lake Lenthall are both fishing well. Lenthalls has cleaned up and the bass and barramundi are back on the bite. The bass and barra have been responding well to early morning surface lures cast around the lilies and weed edges. As the day warms up, fishing the deeper water with Spinnerbaits and lipless Crankbaits has been getting the bites.

Tim Mulhall and I ventured to Lake Monduran last Saturday morning. For the few hours we were on the water we managed to hook seven barra and boated five barra up to 83cm. The hardest part was locating the barra. We used the Humminbird Side-Imaging till we knew there were barra in that area. Once we located them we tried many different techniques till the barra started to bite.

It’s awesome, the amount of healthy small barra that are being caught at Lake Monduran. Good to see stocking efforts between the Monduran Anglers and Stocking Association and Sponsor a Barra are working so well, and Lake Monduran’s future is looking bright.