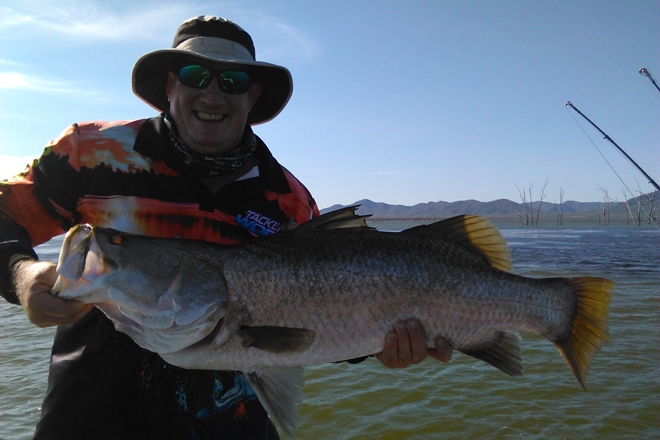 Dale Smith with a 101cm barra he caught recently.

Bundaberg Anglers Make the Most of Good Weather

Let’s hope everyone’s recovered from the Australia Day celebrations this week.  Despite a little bit of rain early, the day turned out to be fantastic and it was great to see that heaps of anglers around the Bundaberg area made the most of the good conditions. Unfortunately the winds are expected to pick up towards this weekend, restricting any action back to our local rivers and impoundments.

Quite a few bigger boats headed out to the reef on Australia Day and all reported catching a nice mixed bag of coral trout, sweetlip, cod, hussar, red emperor and the odd big Spanish mackerel. The mackerel are still around in good numbers right along our coastline.  Trolling bigger hard bodies or casting metal flasher lures have been doing well but floating pilchards and livies out the back is another good option.

Once again, the Burnett has been hard to drive past.  The fishing this past week has been fantastic.  The size and quality of the grunter, flathead, bream, mangrove jack and threadfin salmon has been awesome.  Anglers are continuing to target the grunter around the gravel patches in the Burnett and plastics such as the Gulp 4” Swimming Mullet and 100mm Squidgy Wriggler and small blade and vibes have been working on all the species mentioned above.

With the amount of prawns around at the moment I believe a few may have found their way on the barbecue for Australia Day lunch.  A few nice mud crabs have also made their way into the pots on most rivers around Bundy this past week. Just keep in mind that the barramundi closure finishes at midday on Monday, 1st February.  From then on you can legally catch a bag limit of five barra over 58cm per person.  I know all the Tackle World Bundaberg team members are itching to get back on the water and hook a few saltwater barra.

Lake Gregory has been another hot spot this week.  We’re starting to hear regular reports of saratoga being hooked whilst targeting the many bass that live in this awesome little impoundment.

The barra dams really fired up last weekend with the full moon.  Good reports have come in from Lake Monduran with barra to 95cm.  A few Bundy lads travelled north to Peter Faust Dam to fish the first Bass Nation round.  Congratulations once again to Rick Napier and Dustin Sippel who lead for most of the competition, to end up coming a close second.  It’s great to see these two Bundy lads are on top of their game.  Well done.