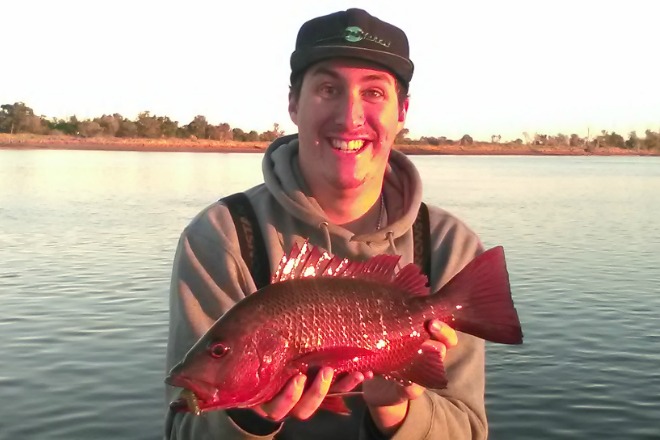 THE forecast for the Bundaberg area for this weekend is looking good with Saturday being the better of the two days.

The Burnett River has continued to produce the goods.  The Town Reach has provided plenty of action with blue salmon, tarpon, queenfish, mackerel and hairtail smashing through the massive bait schools in the river.  Casting hard and soft vibes still remains one of the most consistent methods of hooking up these speedsters.

I managed to get out on the water last Thursday.  Although the wind was blowing and it was freezing cold, we did manage to have a good day and land some nice fish.

One of the first fish caught was a nice mangrove jack along Kirby’s Wall on extremely light gear, as well as a heap of estuary cod and trevally.  Later in the day we ventured up towards Splitters Creek where we finished our session with around half a dozen nice flathead, all on soft plastics.

On the freshwater scene, Lake Gregory’s water level is at the lowest we’ve ever seen it, so take care.  Smaller boats and kayaks getting out on the water are hooking some nice big bass that are schooled up in the deeper parts of the lake.

Lake Cania over near Monto is also on fire.  Anglers are catching big numbers of good quality bass that are schooled up.  These fish have been around 40-50cm.  By the sounds of the Basstastic fishing round that was held at the dam last weekend, the bass weren’t too fussy, smashing most lures, with tailspinners and blades being two standouts.


Lake Monduran is still well worth a crack for a barra.  The better sessions have come in the afternoons in the shallow, sun-warmed bays, suspending hard bodies are still by far the most successful lures and this action should only improve over the next few months.