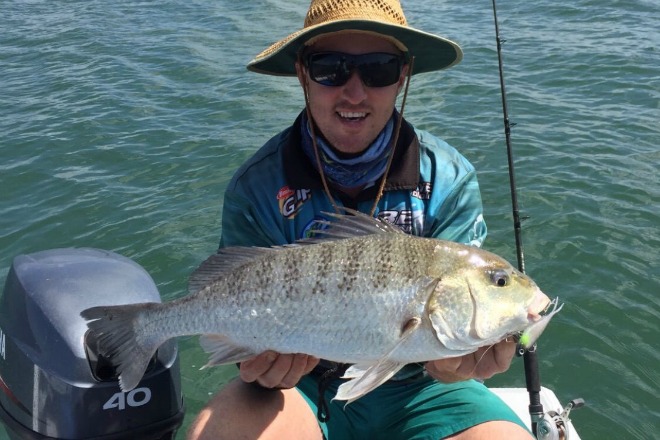 Ben Cole with the 61cm grunter he caught on a soft vibe in the Burnett River recently.

DOESN’T it feel great that the first signs of summer are already on the way in the Bundaberg area?

With the full moon on Saturday night and the day-time temperatures pushing up towards 30 degrees, the surface water temperature should rapidly increase this week.  This means the summer species like barramundi and mangrove jack will be much easier to catch, just in time for the school holidays over the next two weeks.

The Burnett River is still fishing extremely well.  At this time of the year big numbers of flathead seem to hang out along the many rock walls in the Burnett.  Some massive flathead have been caught along the North Wall.  Most have been caught by anglers either casting soft plastics or trolling deeper diving hard body lures along the wall.

Bait fishermen have also been cashing in with some excellent quality flathead, bream, trumpeter, jack and the odd barra all being caught.

The Kolan River is also fishing well with good reports of big flathead, jewies and an odd barra being caught around the deeper channels towards the old mouth.  Trolling hard body lures that dive to 4-5 metres should do the trick.

Further upstream good numbers of flathead and big summer whiting are hanging around most sandbars, while at this time of the year, Yandaran Creek will be worth exploring with it’s many rock bars.

Lake Monduran could be an option for the school holidays.  I know the camp grounds are looking fantastic and quite a few barra have come on the chew as well.


A mate and I did a trip up to the dam last Sunday.  For the few hours we were on the water we managed to hook two barra and spook quite a few other larger barra out from the snags they were hiding in.  The lure of choice was the Jackall Squirrel fished with long pauses alongside the timbered snags.

I’m tipping this weekend should be well worth a crack with the full moon Saturday night and the warm northerly winds should fire up the barra.

Don’t forget – the annual Win Television Monduran Family Fishing Classic will be held on the 15th and 16th of October.  With $1,000 cash for the biggest barramundi caught and a boat, motor and trailer package, along with heaps of other lucky draw prizes, this is always a fun family weekend.