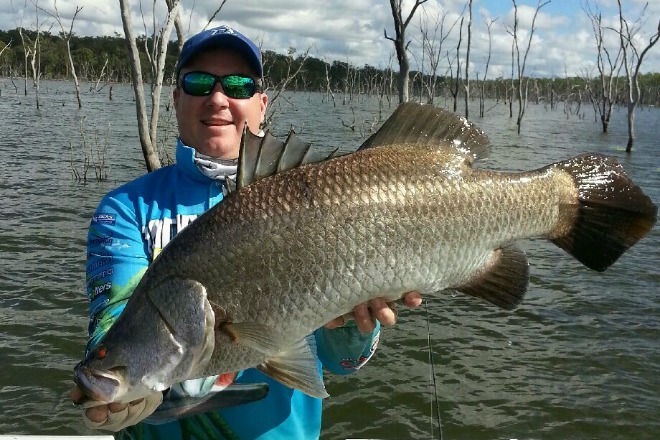 Tim Mulhall with the 75cm barramundi he caught at Lake Monduran.

The Baffle and Kolan have been producing some quality flathead and grunter, mainly by fishing the first of the making tide. A few mangrove jacks have been caught out of these systems, with live baits being the most effective.

The Burnett River is still at its best with good numbers of big bream and grunter coming from the rock walls. Some of the upper reaches of the river have been producing plenty of big flathead and summer whiting, again with the run-in tides being best. But the talk is the amount of blue salmon getting about, and most have been caught on lures with the Strada X-Blade being the hot favourite. If lures aren’t your thing, live baits such as poddy mullet or sprat have been working well.

The Elliott River is also fishing well for whiting and tailor with the top of the tide being the time. Trolling small diving Minnows along the deeper banks has been working a treat.

This time of year is always good to target a few bass out at Lake Gregory. With bass starting to school up in the middle of the lake, it is easy to target them on small soft plastics or metal blades.

Lake Monduran produced a few barra during the week, with a lot of the usual haunts producing fish. The key is to see the barra on your side-scan sounder and then continue to cast your lures in the direction the barra are travelling. Some of the stand-out lures have been the Lucky Craft Pointers, Jackall Squirrels and Fuze Pulse Vibes.

Just remember, if you are fishing Lake Monduran, Lake Gregory or any of the stocked dams in Queensland, you will require a Stocked Impoundment Permit.