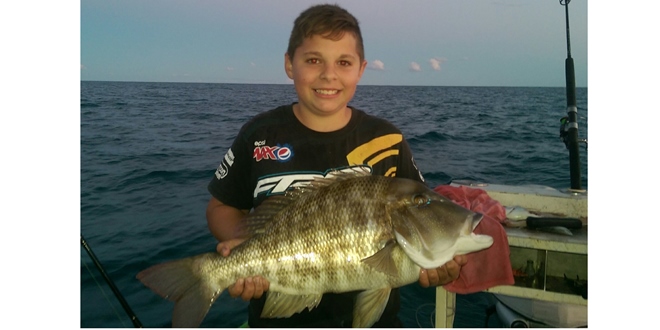 Unfortunately the weather forecast for the Bundaberg area doesn’t look the best for this weekend.  Winds from the south-east are expected to freshen and carry on through the weekend, making offshore fishing too uncomfortable.

Luckily enough our local rivers are really starting to produce the goods with lots of quality bream up to 40cm caught lately as the weather starts to cool down.

We are all tipping that this could be one of the best bream seasons we’ve had in years.  The amount of bream smashing baits and soft plastics all throughout the Burnett system has been amazing.  One of the most popular baits has been mullet fillets cut up into cubes and strips.  Flathead and salmon will also attack a well-presented strip of mullet, so keep that in mind, and you might also try to fish a little heavier than you normally would for bream.

Both the Kolan and Burnett rivers have been alive with small trevally and queenfish.  These little speedsters are top fun on light gear.  Small poppers and metal slices are a great way to target them when they’re busting up around the boat.

The mackerel and mac tuna are still thick all the way along our coastline and a few local lads made the most of the calm conditions last weekend.  One of the hot lures was the 90mm Strada X-Blade.  When it was worked close to the bottom, the boys caught everything on this metal vibe lure, including mackerel, tuna, stripeys, grunter and small snapper.

On the fresh water scene, Lake Gregory is fishing well.  The bass are starting to school up out in the middle.  By all reports a few bass to 50cm have been caught with small blades, tail spinners and slow-rolled soft plastics doing the damage.  The water has cleaned up and there’s been a few bass caught on the surface.  Early morning and just on dark are the prime times to try this technique.

Lake Monduran is starting to see the water temperature drop rapidly.  The temperature is currently around twenty-two degrees and while lots of barra have been seen on the side-imaging sounder, only a few have fired up to have a crack at your lures.  The barra that have been caught in the past week have all been good fish between 90cm and one metre.  There are some good lillies and weed edges growing in the dam and most of the fish hooked have come by casting close to that structure.  Last year we caught barra right through to when the water temperature was eighteen degrees, so we might still have a few weeks left to target this top sports fish.