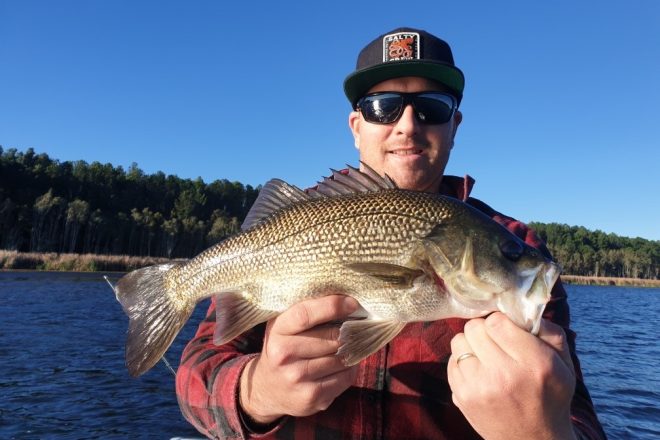 Nathan Sutton with a bass he caught recently at Lake Gregory.

With the weather this weekend not looking the best at this point, for the fishos that can get out offshore, there’s some nice grunter and sweet lip still being caught from the local reefs. Just keep in mind that the snapper and pearl perch closure starts on 15 July to 15 August 2021. Always make sure to check the weather report before heading out.

With the colder weather around, Lake Gregory has been producing some good size Bass. They can be caught from schools that are in the deeper water using spoon lures or a Jackall TN60 vibe. They can also be caught fishing jerk baits on the weed edges. The go to lures have been the Jackall Squirrel 67 in the pink eyed Suji for the sunny days and the banana prawn colour on the overcast days. The retrieve I have been using is a few twitches and a long pause. They have also been using a few different paddle tails. The slider grub is a stand-out in the white.

The colder weather still has the fish harder to catch at the moment, but for the fishos that have been putting in the effort there has been some good fish coming over the side. The main places they have been caught is the shallow flats in Bird Bay. The fish are chasing the bait that like to sit in the warm water. They have been caught on a range of different methods such as trolling Barra Classics on the edges of the timber and weed beds, casting either 5 to 7 inch paddle tails in amongst the trees or on the big shallow flat of a late afternoon once the sun warms the water up through the day.