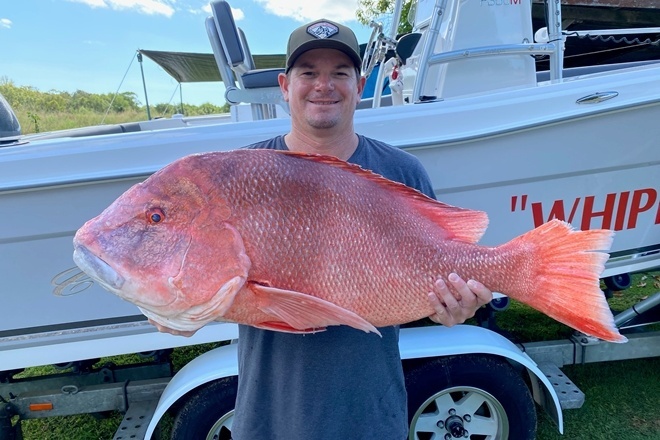 Aaron Fairfull with a massive 15kg Red Emperor he caught offshore of Bundaberg with Whiplash Fishing.

Bundy comes back to life

With the weather looking a bit average for offshore fishing over the weekend for the smaller boats, it may turn out to be ok for the larger boats. Be sure to always check the weather forecast before heading out though. We have had some good reports of red emperor, coral trout, and red throat emperor being caught in the previous week.

For the smaller boats that want to poke their nose out the front, there have been plenty of pelagic species such as tuna, queenfish, trevally, schoolie mackerel and spanish mackerel being caught right along our coastline from Burnett Heads to Elliott Heads. Casting surface lures like poppers and stick baits, also Flasha lures if you are wanting to go a bit deeper. For the bait fishermen, float out a lightly weighted pilchard.

With the recent rain we have had over previous weeks, the Burnett River is firing. Mangrove jacks have been the most sought after fish. Using fresh mullet has been the pick of the baits. If you are wanting to try lure fishing, try using surface lures like MMD Splash Prawns, Zipn Ziggy’s and Rapala Fizzers. Reports have been coming in of good size grunter and bream being caught. Using Vibe Lures or 4” Curl Tail soft plastics have been the gun lure.

These two rivers keep producing the goods. Many reports of barramundi, mangrove jack, grunter, flathead, bream and whiting are all on the menu.  When targeting whiting, fresh bait or live bait is usually best. Pump your yabbies at low tide and fish the same area as the tide comes in over the flats. Before heading out for a fish, throw the crab pots in. There are some really decent size bucks being caught lately.

With the rain from previous weeks and a bit of cooler weather rolling in, the water temperature has started to drop at the lake. The barramundi are feeling more comfortable to come out of the deeper water and are feeding in the shallows. Having fished the Monduran Humminbird Classic over the weekend, the lake was on fire with over 100 barra being caught by 26 teams casting various lures like: Jackall Squirrels, Squidgy Slick Rigs, Hollow Bellies and Samaki Redics.  The most important thing I learnt from fishing in the competition over the two days and nights was to conserve energy.

Fishing mostly on bite times is very important, whether it be on the moon rise, tide changes or sun up, what-ever it might be to trigger bite time.  It might only last ten minutes, or it could last one hour, so make the most of it while it lasts.  Congratulations to MASA and all the sponsors for putting on a great competition. I thoroughly enjoyed it!