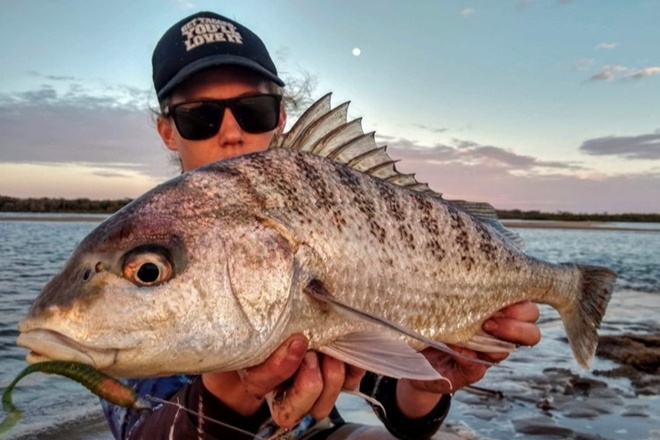 Corey Hanks nailed this fantastic grunter on a plastic in Baffle Creek.

Finally, at this stage the forecast for the Bundaberg area for this weekend is looking okay for the offshore anglers to sneak out and have a crack.  Due to the ordinary weather we have had for the past few weeks, we have not had many reports so fingers crossed there will be plenty of trophy fish caught this weekend.  As always, make sure you check the forecast before heading out.

As Mitch reported last week, there is still plenty of school mackerel right along the Bundaberg coastline. Targeting schoolies with metal slugs is fantastic fun and a great way to secure a fresh feed of mackerel. Plenty of nice grunter and grass sweetlip have been keeping anglers entertained when they are fishing closer to the bottom.

With the past few weeks of warmer weather, summer species like barramundi and mangrove jack have really started to fire up.  Samaki vibes have been working well in the deeper water through the Town Reach and prawn-style soft plastics have been working well around the rock bars and walls in the Burnett River. Rumour has it, there were a few nice prawns down at the Port in the deeper water. With the amount of bait in the Burnett, the quality of the flathead, grunter and bream has been outstanding.

Both the Baffle and Kolan systems have fished well over the past week.  Plenty of grunter, flathead,  queenfish and big whiting have been on the chew.  Mangrove jack are starting to become a common capture in both systems with lures and bait working equally well.  Don’t forget we have our Mangrove Jack competition running for the month of October and November.  Call into the shop to grab your icon and T & C’s.  Mud crabs were a little slow over the school holidays; but gauging on the number of bucks that are just undersized, it’s only a couple of weeks before they fire up big time.

It’s great to see this magical small impoundment once again full of the bass and saratoga on the bite. One of the exciting ways to fish this impoundment is to throw surface lures. There is nothing better than watching your lure being taken as you are working it back to the boat.

The water temperature in Lake Monduran is on the rise and so is the mood of the barramundi.  It’s fantastic to see so many anglers back at the lake chasing barra.  Last weekend plenty of barra were caught close to the magic metre on suspending hard body lures and 5” to 7 “ soft plastics.  Even trolling hard body lures in the main basin has also been working well.  Let’s hope this action continues throughout the summer.

Until next time, fish with confidence.