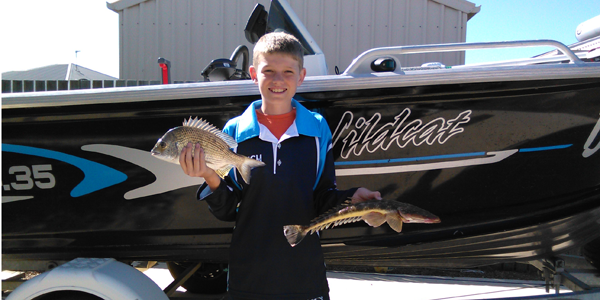 Matthew Smith with the flathead and bream he caught in the Burnett recently.

Unfortunately, the weather forecast for the Bundaberg area for the coming weekend doesn’t look great. The south-easterlies are predicted to strengthen towards the end of the week and ease a little over the weekend, restricting any fishing to the local rivers and dams once again.

Over the last weekend my son and I fished the Burnett River with fresh yabbies and had a ball. It was great to get back to basics by bait-fishing as we both caught lots of fish in a four hour session. The species included big bream, whiting, flathead and blue salmon. The salmon provided the most action with screaming drags and the odd bust-off not uncommon with the light gear.

By all reports most boats had similar action with the first hour of the run-in tide fishing better. The only down side was the amount of hooks that were lost due to the toad population.

The Elliott River should be another good option this weekend. A few local lads had a top time last weekend casting soft plastics and the new small suspending lures from Maria. These lures have a great action and the fish, including small golden trevally, queenfish, grunter and flathead just kept smashing them.

Lake Monduran was a popular destination over the long weekend. This is a magic place to camp but the barra fishing was a little tough with only a couple of barra caught.

Better numbers of bass have been caught at Lake Gregory. The bass are schooling up well and responding to small blades, tail-spinners, lipless cranks and soft plastics. Around the edges is thick with weed, so fishing the deeper parts if a better option to hook up a few Australia bass.