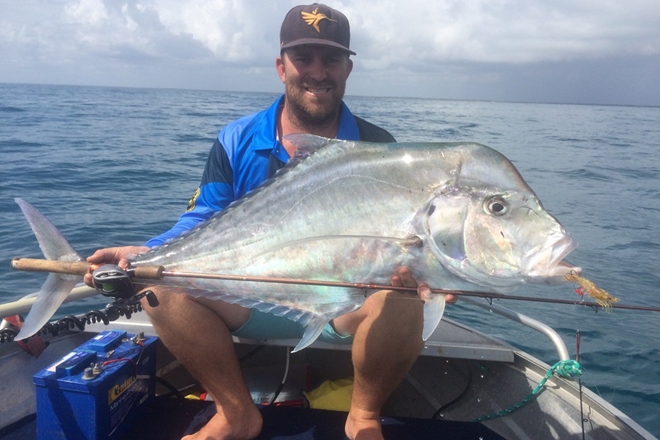 Jordan Stoddart with the 110cm diamond trevally he caught off Burnett Heads recently.

Once again the fishing around Bundaberg will have to be restricted to the rivers and impoundments, with 20-30 knots south-easterlies predicted for this weekend.  Now summer is finished, let’s hope some good weather is just around the corner. It’s great to see that all our local rivers and creeks have cleaned right up and the fishing has also started to improve with the better conditions.

The Burnett has also been a little quiet this week, but I have heard of a couple of nice jack caught along Kirby’s Wall.  A few good sized barra have also been trolled up using bigger barra lures like the Killalure River Rat.  These have been being working very well down towards the mouth.  Bait fishermen putting in the hours have been rewarded with some big grunter between 5o and 60 cm.

The Kolan River has cleaned up quite a lot from last week.  Whilst the fishing has been a little quiet, the crabbing and prawning has made up for it.  Those putting in the hours are still being rewarded with some nice barramundi, flathead, mangrove jack and grunter caught around either of the two mouths.

Baffle Creek has been performing well over the past few weeks.  Lately, good numbers of nice whiting, bream and flathead have been caught from Winfield through to the mouth.  Anglers chasing barramundi and mangrove jack have also been doing well around the sunken snags in the same area by casting bigger soft plastics and trolling bigger hard body lures that dive between three and five metres.

There have been some whispers that a few prawns have showed up in the deeper holes and a few nice muddies have also been caught this past week.

The Lake Monduran barramundi have been hard to tempt to bite since the water has risen.  Traditionally, the end of March into April and Easter is an awesome time to target the barra.  As the water just starts to cool down the barra start feeding back up on the shallower points and are best targeted using soft plastics and suspending hard body lures.  The bigger barra that have been caught are averaging between 90-100cm, so make sure your gear is in tip top condition, and let’s hope Monduran improves over the next couple of months.