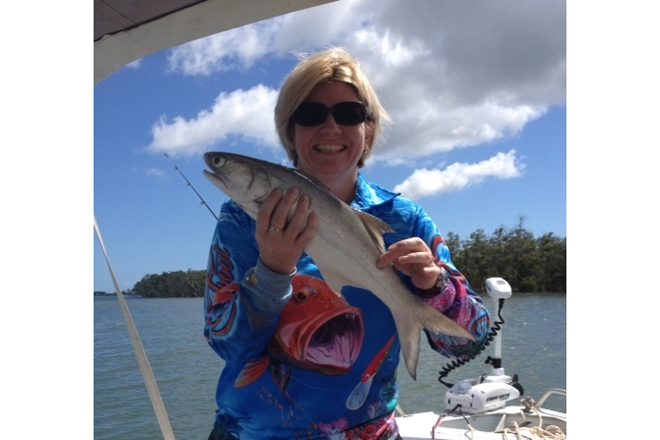 Burnett River Firing on All Cylinders

Due to the fact that it’s my weekend to work, I’m tipping that the fishing around the Bundaberg area will be fantastic this weekend. At this stage the forecast is predicting that the winds will be up around 20-25km/h from the southeast and a slim chance of showers also possible on both days. The swell from Cyclone Winston is easing but will need a week or so to venture offshore, if the wind ever backs off.

All reports that we have received this week have come in from our local rivers and impoundments. The Burnett is back firing on all cylinders.  The water has cleaned up and good fish are being caught from the town reach to the mouth. Good numbers of big grunter, bream, mangrove jack and flathead are back in the river.  Both casting soft plastics and using fresh baits such as mullet fillets and fresh yabbies are all working well.

Anglers trolling larger lures that dive between three to five metres have also had some success hooking a few blue salmon and barramundi around the rock walls and deeper holes. The Kolan River has also been fishing well around the mouth.

Campers staying at the Miara Caravan Park are reporting catching some nice whiting, grunter and flathead around the sand bar in front of the park. Good numbers of mud crabs are also been caught and with a bit of effort, cast-netting, most guys have been getting a fresh feed of prawns.

Lake Gregory is continuing to fire.  Quite a few anglers fished this magic little dam last weekend, preparing for competitions coming up next month.  I believe that the dam is fishing as good as it ever has.  Bass are being caught on many different styles of lures, from top water lures to blades and soft plastics all being very effective on the bass up to 50cm this past week.