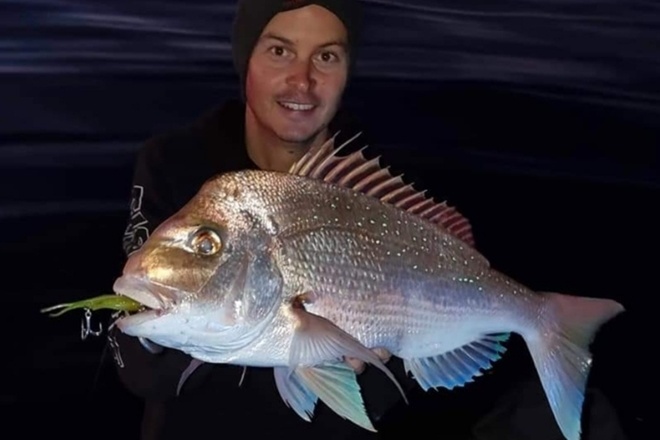 Nic Hamilton with a snapper he caught off Bundaberg recently.

With the water cooling down the snapper are really starting to turn up.  Working 20g soft vibes and 5” soft plastics off the bottom at sunrise and sunset has been getting most of the action. Lightly weighting squid and pilchards is a deadly trick as well. Definitely keep an eye out for big spanish mackerel roaming around as well, floating out a live bait while snapper fishing can definitely be an effective way to catch them.

Better numbers of blue salmon have been turning up in the town reach over the past week. Using 20g vibes and live sprat has been getting most of the action; aim to fish towards the bottom of the tide. The bream are on the chew as well. Hopping small soft plastics over rock bars and using prawns and mullet gut as bait will get you into the bream action.

The Kolan and Baffle has been producing some very nice flathead and whiting. Most of the flathead have been getting caught by slow rolling 3” Zman soft plastics over sandbars. The whiting have mostly been caught fishing the incoming tide with fresh yabbies and beach worms. There’s still some late season mangrove jack on the chew as well so be sure to work some lures and set some live baits on the shallow rock bars. Also drop some crab pots in, there’s been some really good quality crabs being caught.

Lake Monduran has still been producing some very nice sized barra. Fishing the afternoons has definitely been the go with the water temperature being higher. Working Jackall Squirrels on the shallow points and in the shallow bays has been the places to be. Remember to fish with confidence, you never know when that 1m+ barra will smash you!