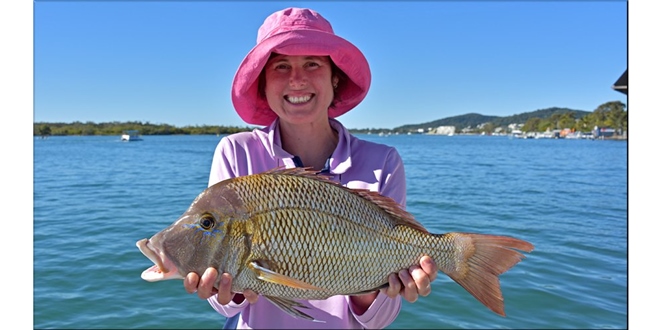 Cooler weather will bring on the fish

With the cooler weather we should see those cooler water species really come on the bite! Snapper, tailor and large winter bream should all be firing in the later part of the week.  Offshore there have already been some great reports with good pearl perch and Snapper from the Barwon Banks with Parrot, Amberjack and Moses Perch amongst them.

Pearlies have also come from Chardon’s reef with a lot of them falling to the 35g and 42g Shimano Colt Sniper Micro Jigs. Up on North Reef Snapper and Squire have been hitting the decks as well as good numbers of trag Jew.

In the bay tuna are still feeding hard on bait schools with mac tuna the most prevalent but there is the odd longtail amongst them. If you are chasing tuna give the Ultra-flash slugs from River2sea a go they come in a great rang of sizes and colours.

At the river mouth, luderick around the rocks on the run in tide. Cabbage and weed baits have picking up the better fish with peeled prawn pieces also working.

Trevally and tailor schools are also showing up around the mouth, a well presented plastic or strip bait has been doing the trick.

Trevally are also lurking around both Woods Bays. Surface lures in the low light periods and plastics like the Kitech Easy shiner in the 4inch bounced high off the bottom during the day has been the best option. Good Bream and flathead have been everywhere in the system.

Fresh Mullet strips doing the trick with the Zerek 3.5” Flat Shad good on the bigger lizards. Good Trevally schools also present at the Tewantin stretch mainly just out from Noosa Marina with the odd school Jew still coming from the deeper water around the ski runs and up towards the lakes.

Off the beaches there have been some solid bream on the top of the tide around Peregian, Castaways and Sunshine stretches, with fresh mullet and small pilchards working well. There are still copious amounts of swallow tail dart spread along the beaches.

Tailor coming from the gutters along the Northshore. Fast retrieved Slugs or a Whole Pilchard on a set of gangs have been the best methods.

Now for all the  latest information  log onto www.fishingnoosa.com.au for up to date bar and fishing reports and don’t forget to drop into Davo’s Tackle World Noosa or Davo’s Bait & Tackle Northshore at Marcoola to find out what’s biting and where, and remember Tight Lines and Bent Spines!