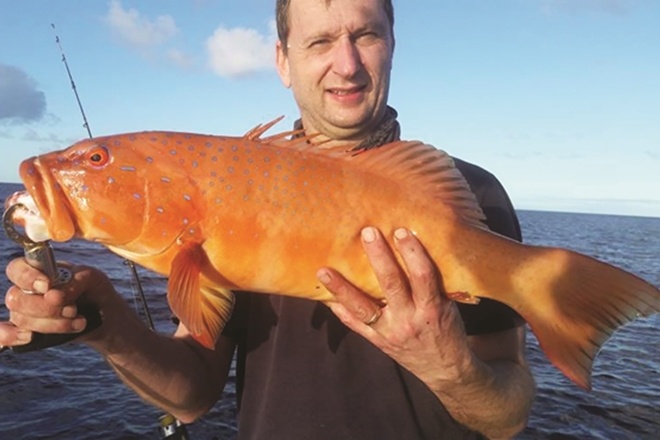 Stefan put in a great deal of effort fishing off Seventeen Seventy.

Ian and Stefan decided to do an early raid to Seventeen Seventy, fishing midweek as a precursor to the annual BNB Trophy competition in September. The main target was to be big red fish – but anything from up there was going to be more than welcome in the Esky.

The weather was awesome, though the fishing on the first day was a bit slow at best. Yet, they did land a couple of decent reds and few other bits and pieces to keep them interested for the following day. Wednesday the dial was turned up right from the get go.

Fish were jumping in the box from all directions including two school reds that came up in quick succession. Ian wasn’t as hot on the camera as he was on the fishing rod but he finally managed a couple of shots that incorporated Stefan’s head – though he’s still to be convinced these looked better.

Time ticked on and the fish kept coming when Stefan’s line was smashed by something of size, which left him thinking it was a shark. He thought of busting it off but was talked into bringing it up to check by Ian – probably to tire him out a bit too as he was being taught a bit of a lesson at the time.

After a 15-minute battle on a 30lb line, up popped a nice cod – much to everyone’s pleasant surprise. Next drop on almost the same spot and bang, off it went again. The fish fought the same way, leaving Stefan certain it was another cod.

With one already in the Esky, he was about to bust it off when again Ian stepped in and convinced him to at least get a glimpse of colour to see what it was first. Job done – Ian sat back down in the shade of the canopy to watch Stefan strain, wheeze and complain until the leader hit the rod tip.

Stefan looked over the side expecting to see another big cod but instead it had morphed in to the best red emperor of the trip so far. Showing the speed and zip of a much younger man, Ian quickly had the fish in the net and on the deck, which was just as well as it was barely pinned, hooked high on the cheek.

It looked like it had sideswiped the bait but no one cared when it was safely in the Esky. The fishers cast a little longer and finished with a nice haul including five red emperor to 9.5kg, coral trout and three different species of cod, to name a few. With time on their hands and the conditions remaining perfect, they did the tourist thing and had a look around, with a spin around Fitzroy to give Ian a feel for the place.

With summer nearly upon us, it’s probably time for those who’ve had their boats sitting dormant for a while to dust them off and book a service with your local marine dealer for a little tender loving care. Plan and book in early as trying to get a boat in for a service at short notice is practically impossible.

Besides the fixed workshops, a number of quality mobile marine mechanics are around these days and the convenience of having someone come to you can be a very handy option. While on servicing, don’t neglect your trailer. No one want’s to be the person sitting on the side of the road wondering which way the wheel went and why they didn’t spend the extra $100 to replace the wheel bearings – we’ve seen it too many times.

Also, if you haven’t already, give some thought to joining your local Volunteer Marine Rescue or Coast Guard – chances are you won’t need them but if you do it’s cheaper to be a member than not. Trust me, I know after breaking a steering cable near Moreton Island and having to get a tow home.

Please note that meetings are now held on the first Wednesday of the month. 6pm for a 6.30pm start at The Club Manly (bowls club), 26 Faine St Manly. Next meeting is scheduled for Wednesday November 4. Feel free to come and join us to see if it’s for you.

Until next month, safe boating.