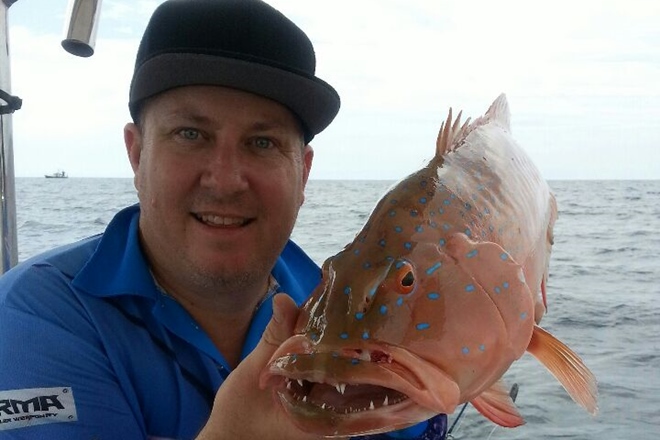 The author with the nice coral trout he caught off 1770 last weekend.

Last weekend saw a good offshore forecast for the Bundaberg area, allowing a lot of big boats to head offshore.  Those who put in the time and effort were well rewarded with some quality reef fish.

Good numbers of coral trout, sweetlip and parrot were caught.  Some of the real big boats got out to the shelf and caught some big red emperor and jobfish.  Most of these areas also produced some nice cobia and spanish mackerel as well.

Some of the inshore reefs are also fishing well for sweetlip and snapper.  There appears to be plenty of mackerel, tuna and queenfish along the coast with most being caught on metal spinners and surface poppers.

The rivers and creeks are fishing well and the bit of rain we have had should only get things going better.  Reports have shown good numbers of grunter still about.  Their size is mixed but using bigger baits has caught the bigger grunter.

There have been a few whiting and flathead on the sand flats, mainly on the first of the making tide.  A few of the deeper holes throughout the river have held a few threadfin salmon and mangrove jacks.  Live-baiting or using soft vibes has been the way to go.

If the rain keeps up it surely should get the prawns and crabs going, so fingers crossed.

Lake Monduran has also been fishing well with some quality barra being caught.  Bird Bay still seems to be one of the hot spots for the bigger barra.  Soft plastics such as the Zerek Flat Shads have been the stand-out lure for Monduran’s big barra.