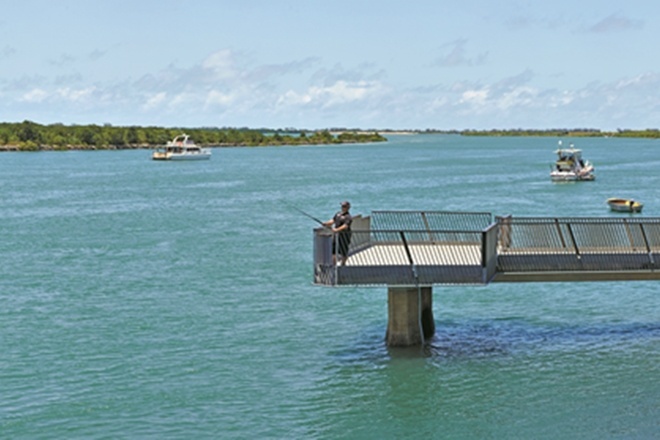 The fishing pier at the Bluewater Quay will be enhanced with an artificial reef.

GETTING anglers from all over the world ‘hooked on Mackay’ is one step closer due to an exciting artificial reef project. The project aims to enhance recreational and tourist fishing experiences via complex marine habitat installations adjacent to three popular fishing platforms in the Pioneer River.

Mayor Greg Williamson said the Bridge Road, Brisbane Street and Carlyle Street fishing platforms would all benefit from having the underwater installations within casting distance.

“These platforms are already popular with local fishing families and tourists,” Mayor Williamson said.  “They are easily accessible to children, families, retirees and persons with disabilities.

“They are also all connected by the Bluewater Trail.” Increasing the habitat complexity at these sites by installing artificial reefs would attract greater numbers of larger fish and more desirable species to these platforms.

“The habitat reefs are made from environmentally-friendly concrete, and over time the habitat reefs will become indistinguishable due to the rapid growth of reef-building marine organisms, adding further habitat and biodiversity,” Mayor Williamson said. The Pioneer River artificial reef project tender has been awarded to SMC Marine.

The reefs were just the latest outcome of council’s Recreational Fishing Strategy that had been delivering key actions since 2017. The strategy’s aim was to increase the economic contribution of recreational fishing and help the Mackay region gain Australia-wide recognition as a premier fishing destination.

“We have invested heavily in marketing campaigns to promote the fact that anglers have access to tremendous fishing options in our region for 365 days of the year,” Mayor Williamson said.

“From the Great Barrier Reef and Cumberland Islands to our three stocked impoundments with world record size barramundi and our Cape Hillsborough to St Helens Beach Net Free Zone, there is somewhere to chase a trophy fish at any time of the year.

“To promote this, council’s marketing strategy has included the creation of the ‘Hooked on Mackay’ brand.

“Hooked on Mackay has a Facebook following of more than 4000 anglers, with about half of those coming from outside of the region.

“Through viral marketing, posts on that page have reached up to 300,000 people.

“The website has racked up more than 5000 visits and Instagram and YouTube offerings have also recently been created, all highlighting how amazing fishing is in our region.

“To further encourage the fishers of Australia to become ‘Hooked on Mackay’, council has taken 23 magazine advertisements in popular Australian fishing and travel magazines.

“We have also facilitated 22 magazine feature articles, two high profile television specials and secured the Australia Fishing Championships (AFC) to be held and filmed in our region.

“We’ve partnered with the AFC since 2016 and that competition, featuring our barramundi and sooty grunter fisheries and some of the world’s best anglers, is broadcast nationally and internationally to China, South Korea, Japan and Pan-Asia and has an audience of 38 million.” Mayor Williamson said council had also invested heavily in infrastructure including artificial reefs, promotional signage for Mackay’s Net Free Zone and improvements to land-based fishing and boat ramp facilities.

“There are considerable boat ramp upgrades being undertaken this year, including lighting and CCTV installations, parking expansions at Victor Creek and more than 30 new car parks at Murray Creek,” he said. Council was also working with stakeholders to improve the region’s fisheries through fish stocking, education and waterway improvements.

Including sponsorship of Mackay Area Fish Stocking Association and their vital stocking programs, the installation of 194 fishing attracting structures deployed at 36 locations in Kinchant Dam, oxygenating key pools in the Gooseponds catchment to prevent fish kills and developing, improving and maintaining more than 20 council-owned fishways to facilitate fish migration and recruitment.

“One of our earliest outcomes was the introduction of a Voluntary Code of Conduct for the Cape Hillsborough to St Helens Net Free Zone,” Mayor Williamson said.

“This encourages our local and visiting fishers to pledge to adopt sustainable and responsible fishing practices to conserve our fisheries resources.

“So far, almost 600 anglers have taken the pledge.”