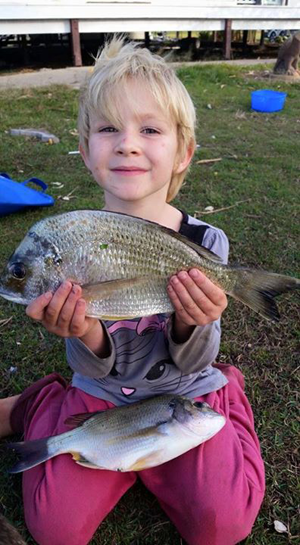 During the past week the weather around the Bundaberg area has been a little up and down, but by the weekend it looks like the showers will have cleared with a fine weekend predicted.

At this stage the offshore action will have to wait until the constant south-easterlies ease. Luckily enough, all the local rivers and creeks are fishing extremely well for all winter species.

Baffle Creek and the Kolan River have been fishing really well for flathead, bream and whiting. Also, quite a few small chopper tailor have showed up, taking soft plastics and baits.

The Burnett River has been the place to be to catch big bream and flathead. Most of the deeper holes and rock walls in the Burnett have been worth a crack. Other species that have been caught during the past week include estuary cod, trevally and blue salmon, which are all exciting to catch.

The Elliott River has been alive with baitfish, and small trevally and queenfish seem to be everywhere. A top method to catch them has been to cast small poppers during either early morning or late afternoon sessions.

The Elliott River is famous for its big summer whiting and there have been a few crackers caught, biting well on fresh yabbies or sand worms.

Most of our local rivers are producing some great mud crabbing, so dust of the post the next time you head out.

On the fresh water scene, Lake Monduran has fired up last week with a few barra boated. Both guides operating on the dam reported seeing heaps of barra schooled up on the sounders. The barra seem to be roaming up onto the shallows chasing some warmer water. Casting suspending hard body lures over the shallows has been working well for the anglers chasing Monduran’s winter barra.