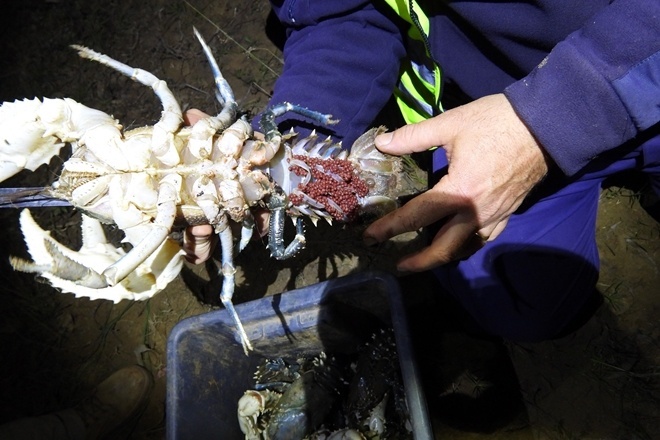 Murray Crayfish carrying ova (eggs) must be returned to the water immediately with the least possible injury.

Two men have been issued $6400 in fines plus court costs after being found guilty of Murray Crayfish theft. In response to information received, NSW DPI Fisheries Officer’s apprehended two men on the 17 June 2020 following an extensive surveillance operation of their fishing activities on the Murray River near Barooga.
Officers located a large number of Murray Crayfish in bags that had been concealed in bushland near where the men were camped and two unlawful wire traps. Thirty Murray Crayfish were seized in total.
Murray Crayfish are a listed threatened species and are subject to strict fishing rules. Murray Crayfish have a minimum size of 10cm and a maximum size of 12cm in carapace length and must be measured in the prescribed manner upon capture and returned to the water as quickly as possible if not falling within the prescribed length.
Murray Crayfish have a daily take limit of two and a total possession limit of four. Murray Crayfish carrying ova (eggs) must be returned to the water immediately with the least possible injury.
During the open season of June, July and August, Murray Crayfish can only be taken from prescribed areas of the Murray and Murrumbidgee rivers. It is an offence to take Murray Crayfish using any form of trap.
Members of the public are urged to report suspected illegal fishing activity by calling the NSW DPI Fishers Watch service on 1800 043 536 or report it online at: https://fal.cn/3fdcD