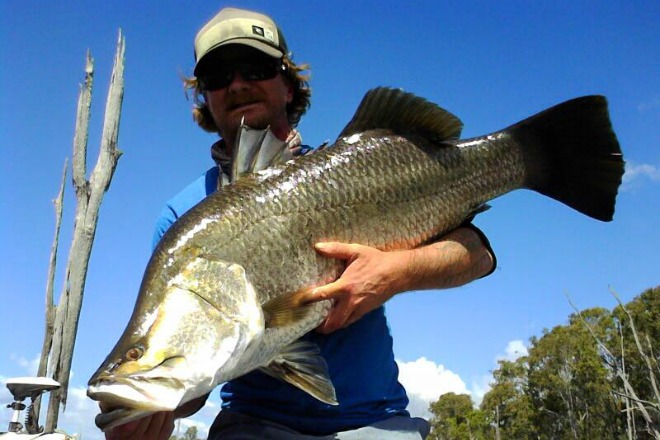 Casey with the 106cm barramundi he caught at Lake Monduran recently

Fishing for barra, bass, flathead, bream and grunter in Bundaberg in Spring

THE first week of spring is always a magical time of the year around Bundaberg.  As the water temperature starts to rise, so should the fishing with some quality mangrove jack already starting to smash lures and baits.

The Elliott River has been producing the goods with a good run of large summer whiting around the sand bars towards the mouth.  Best baits have been beach worms, yabbies and peeled prawns.  The Elliott has also produced some awesome flathead and the odd mangrove jack further upstream.

The Burnett River is still fishing well.  Big numbers of flathead, bream and some monster grunter have been caught around the Port.  These better class of fish are no doubt chasing the prawns and baitfish that have showed up near Burnett Heads.

With the warmer weather the Kolan River and Baffle Creek have also come to life, with some great catches of grunter, flathead and some cracker jacks.  Live-baiting with small sprat or poddy mullet has been a favoured method to tempt the bigger jacks.

All of our local river mouths have been producing some chopper tailor, queenfish and the odd GT.  Throwing surface poppers and small metal slugs has been a great way to fill in a few hours.

Lake Gregory is back in action.  Now the impoundment is back to normal height, getting small boats in and out is much easier.  Anglers are having sessions of twenty or more bass in a few hours.  The bass have been active early up in the shallows.  Watching your poppers and small stick bait lures getting smashed is always a fantastic way to start your day.

Once the sun is high in the sky, try targeting the bass schooled up in the deeper water.  Lures such as tail spinners, blades and soft plastics have all been working well.

Rob Howell from Lake Monduran Holiday Park has reported that the barra have started to fire up in Lake Monduran.  Barramundi up to 113cm were caught this week using suspending hard-body lures such as Jackall Smash Minnows and LuckyCraft Pointers.  Most of the barra seem to be hanging around the shallow sandy points leading into the windward bays.  Let’s hope this action continues and more barramundi around the magic metre start to be caught.