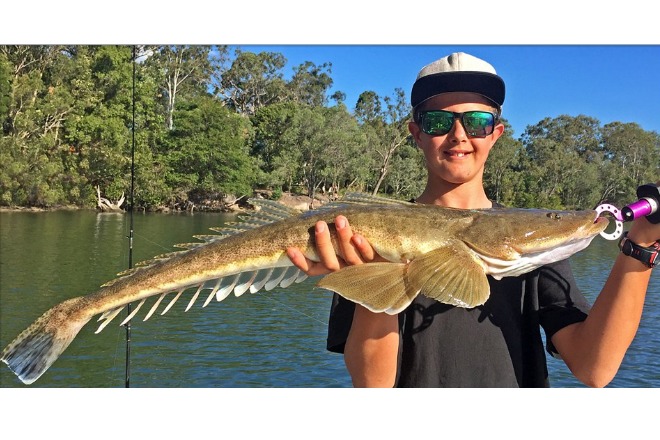 Flathead are plentiful in the river

Yet another perfect weekend for Noosa angler to get out and take advantage of the wonderful conditions.

Starting with the Noosa River; the tailor have again been on the chew with the river mouth, Woods Bays and the frying pan all great spots to target them, trevally have also been in the mix with plenty of those 30 to 40cm fish to do battle with. Fishing surface lures like the River2Sea Rovers and Bubble Pops have been doing the job firing up the fish. Flathead are still in good numbers right throughout the system with the area near the Council chambers and Noosa Marina one of the best.

The Mouth of Lake Donella has also producing some nice fish. There have been some nice jew coming from the deeper holes along the ski run, taking a liking to small plastics like the Keitech Crazy Flappers, Luderick still in good numbers off the rocks at the mouth with some angler having luck with wet fly’s. The odd winter jack is also around, as we keep getting these warmer days the water temperatures will start to rise in the lakes and the jacks will become more aggressive in the way they feed. Live baits will be the most productive but suspending hard body lures will also be worth a try.

On the beaches there has been the odd jewie at night from the deeper gutters along the Noosa North Shore. There are some good gutters north of Teewah which is where most of the jewies have been coming from. Those same gutter have also produced some nice tailor with the majority of fish taken at night or in the low light periods. Tailor is a great bait for jew so try whipping the sides off one of those tailor. There are still some nice winter sized bream coming from the beaches, small fish style baits like hardy heads and white baits have been the go to bait.  There are plenty of dart and whiting around as well and are great fun for the kids to catch, worms and pippies are the perfect baits.

On the offshore seen, plenty of snapper have been boated from the Jew Shoal and Little Halls. The low light periods with a high tide has been the key, another great way to improve you catch rate is making sure you are setting a burley trail, small cubes of pilchards tossed into the water at regular intervals will create a burly trail and help to bring the fish on the bite. Try fishing as light as possible with lightly weighted bait similar to the same size as the burly, this method has been getting some good results.

Down on Sunshine Reef good numbers of squire, sweetlip and the odd trout, again fishing with burley has produced the best fish. Pearl perch have been in good numbers around Chardons Reef along with cobia and jewies. Larger boats that made the run out to the Barwon Banks were rewarded with amberjack, snapper, gold band snapper, pearl perch, cobia, venus tusk fish, hussar and Maori cod. Tuna have also been at play in Laguna Bay with a 13kg model boated earlier last week.