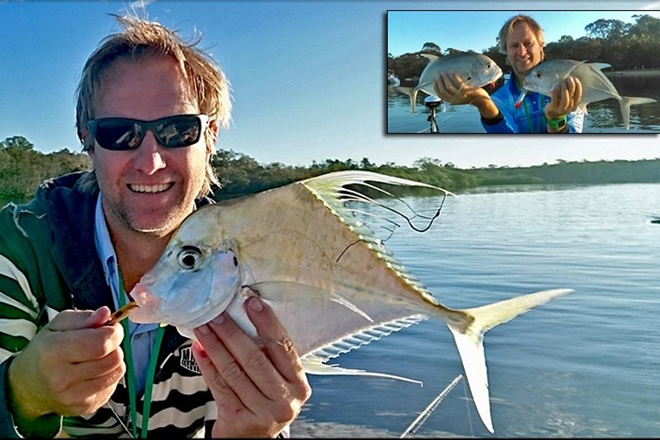 Fresh Water in Noosa System Sends Trevally to the Mouth

With the water in the river dirtying up again after the rain, trevally have been feeding closer to the river mouth.

Surface lures like the Davo’s River Popper and the Cultiva Go-Bo popper have been the most successful catching a good majority of the fish. Early morning and late afternoon being the best time to fish this area. Queenfish and tailor have also been amongst the trevally schools. Whole frog mouthed pilchard have also been a popular bait to target the tailor with. Woods bays has been where most of the action has been.

Bream are thick right throughout the river system. Small grub pattern soft plastics are the best option if you want to target them on lures. Lightly weighted flesh baits like strips of mullet flesh as well as prawn are also a great option to target them. The sand banks around the lower part of the estuary have been worth working with soft plastics for good flathead. Look for those area where there is a bit of a drop off as the fish will lay and wait for a passing morsel.

The blackfish have started to show up around the river mouth Carpark rocks. Cabbage and weed under a float has been the go to method.

Heading offshore, things started to get a little hairy for those thinking of a trip offshore over the weekend. Angler that fished a little earlier last week did well with the anglers that made the big trip out to the bank and up to the reefs off Double Island having some great success. Amberjack, snapper, pearlies, cobia and red emperor were all on the menu, most fish were of a good size with some large knobby snapper amongst them.

North Reef saw some quality snapper, grass sweetlip, teraglin jewfish, pearl perch, moses perch and coral trout. There have also been some nice snapper, pearlies and jew coming from Chardons reef. With the water temperatures dropping the closer reefs will really start to shine as the reef species move in.

The new weighted bait clip system from Max Tackle has been working well with the jew and large tailor. This is where only a large sinker is cast out and then a live bait is clipped onto the line and swim down toward the sinker. This effectively gets your bait out a lot further into deeper water.  For the kid there are plenty of whiting and dart in the closer gutters.

In the fresh water, bass have been holding around the timber in lake Borumba. Bassman Spinnerbaits in the 3/8oz size has been an effective lure to find these fish.

Now for all the  latest information log onto www.fishingnoosa.com.au

For up to date bar and fishing reports, don’t forget to drop into Davo’s Tackle World in Noosa or Davo’s Northshore Bait & Tackle at Marcoola to find out where the fish are biting.