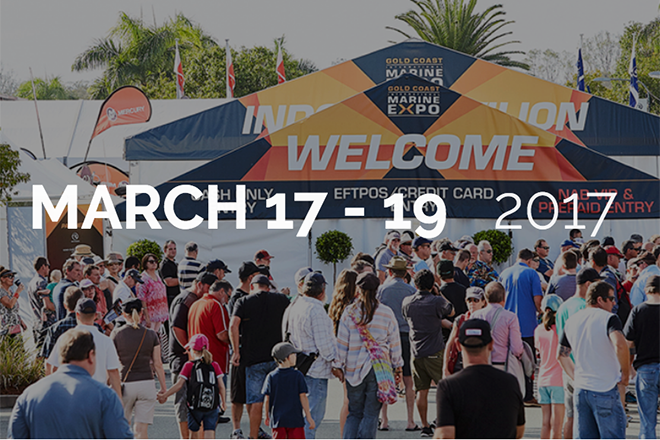 BOATING enthusiasts will find everything they need to have fun on the water all in one place when the first major Australian boat show for 2017 gets underway on Queensland’s Gold Coast starting tomorrow.

Billed as the boat show for real boaters, there is an incredibly diverse and very impressive Fleet of Firsts being rolled out every week in the lead-up to the Gold Coast International Boat Show & Marine Expo at Coomera from 17-19 March.

“More world-leading brands and businesses are stepping aboard every day with their new-year releases – and the boating public will be able to see it all first right in the heart of the biggest recreational boat-building and shipyard facilities in the Southern Hemisphere,” said Event & Marketing Manager Emma Brown.

“With over 96% of exhibitor space now sold or reserved, 2017 will be our biggest boat show ever.”

See it first – on the water

New from the Queensland-based Clipper Motor Yachts stable is the two or three cabin Cordova 51 which has already been sold to a Melbourne-based businessman.

This impressive yacht has twin Cummins 550hp QSB diesels and is a sister to the new generation Cordova 60 model which will also be on display at the Gold Coast boat show along with a selection of Marlow yachts and Cobalt boats.

“We will also have our new Cobalt showroom ready in time for March so if you want a trans-continental bluewater passage maker, a semi-displacement luxury cruiser for exploring the Whitsundays, a superbly appointed sedan cruiser for a week away up in the bay or a stylish day boat to take friends out for cruise or a ski … we will have it all to see first at the Gold Coast boat show.”

See it first – on the land

The 2017 Sailfish 2800 Platinum ticks all the boxes for the angler, and was built with one clear objective: the ultimate blue water fishing performance available on a trailer in Australia.

Built in Ballina and showcased by Webbe Marine, this completely redesigned model offers a cockpit that would make any charter fishing operator jealous.

Gaven Daley from Webbe Marine said it was a pleasure to show this big trailer boat at the Gold Coast International Boat Show.

“We are returning to the Gold Coast boat show to exhibit this year and we are really looking forward to it – March is a great time of year to go boating and to get ready for next season,” he said.

Shaun Hale said the new 2017 EX model is agile, fun and playful with a powerful engine and when it comes to muscle craft, the new 2017 Yamaha GP1800 is fast yet friendly and by far the best out-of-the-box Waverunner that money can buy.

“We always do really well at the Coomera show both in terms of sales and serious enquiries,” he said. “It’s a really friendly atmosphere … just great family fun with great people.”

Combined, they provide intelligent thermal analytics that bring an advanced level of awareness and safety.

“Users have the ability to see more, know more and operate more safely on the water,” he said.

The 2017 Minn Kota range is already creating global excitement and you can see it all first in Australia at the BLA display.

Erwin Salidaga from BLA Distribution said the new models feature a host of improvements including enhancements to i-Pilot Link systems, the most accurate Spot Lock ever, new Terrova and RipTide Terror motors and new PowerDrive trolling motors that provide increased functionality and performance when it is needed most.

“BLA also has another exciting product first-release and we will be announcing that in coming weeks that you will also be able to see first in March,” said Mrs Brown.

Mrs Brown said boat show visitors would be able to come and join the Team D-Max professional drivers and take on the world’s steepest 4WD ramp – the 45-degree Iron Summit – free at this year’s event.

“This super-sized see-saw is an incredible way to experience the factory-standard climbing capabilities of Isuzu UTE Australia’s range of 4×4 vehicles – operating 9am – 4pm each day of the show,” she said.

Giving back to our charity partners

“Our boat show is a not-for-profit event which has directly donated over $88,000 to its official charities,” said Mrs Brown.

“In 2017, the boat show proudly continues its fundraising efforts.”

Mrs Brown said a raft of additional World, Australian and Queensland Premieres will be announced in the coming weeks, with the countdown to the Gold Coast International Boat Show & Marine Expo.

“Our extensive and growing list of Premieres spans the entire boating spectrum – everything from luxury motor yachts to sailing catamarans, engines and accessories to tenders and trailer boats, kayaks and stand-up paddleboards to jet skis and fishing equipment … and everything else in between … at Queensland’s largest boat show.

@@BNBFishingMag
Previous Insights into boat insurance and you could win a rod!
Next Feel the Mercury Edge at the Gold Coast International Marine Expo