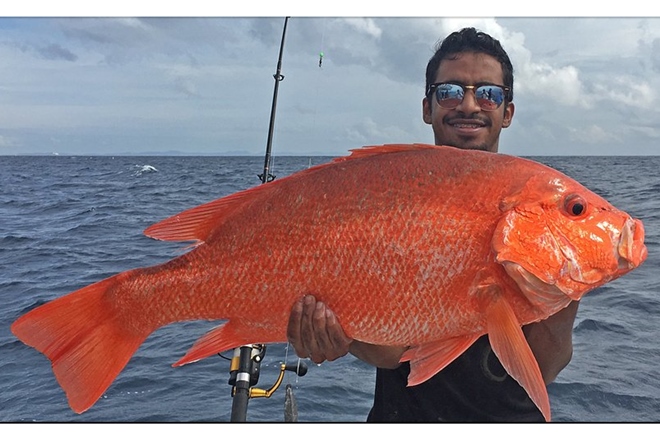 Aziz from Melbourne with a thumper 7.5kg large-mouth nannygai which he boated on Sunday morning's Trekka 2 charter. Photo: www.fishingnoosa.com.au

What a great Easter it was for Noosa. Not only did the little rabbit bring lots of sweet treats he also brought some outstanding weather.

In the Noosa River, the bread and butter species like whiting and bream have been on most angler’s hit list, whiting have been targeted around the Frying Pan area, Dog Beach, Gympie Terrace and Weyba Creek areas. Live worms yabbies have been the prime baits. There has been a good run of prawns in the river, having the cast net handy is a good thing. Not only are they good eating but make fantastic bait. Crabs are also in good numbers with the deeper sections of the river holding the better crabs.

There have been plenty of trevally taken around Munna Point, Woods Bays and the area and just west of the Noosa Yacht Club, smaller hardbody lures the Lucky craft Pointers have worked well. Mangrove jack of good size are on the move at night and are beating up baitfish on the outgoing tide. Live baits like mullet and herring, as well as big strips of fresh mullet have been responsible for some nice fish. A little further upriver Lake Cooroibah is holding Heaps of flathead, brightly coloured soft plastics have been working well.

On the beaches, dart, whiting and flathead have been bending rods along Teewah Beach. Up towards Double Island, Jew and tailor are coming from the deep gutters along the beaches, best time to fish is at night between sunset and moonrise, strip baits like mullet and tailor on a large ganged hook rig is the best setup. The closer gutter on the southern beaches are over run with dart, this make for great fun with the kids as they are also certain to pick up a few fish. Smaller bait like prawns, worms and pilchard pieces have been working well.

Offshore, things have been going gangbusters. Larger spanish mackerel are still hanging around on most of the reefs with the water temp still right up there. Sunshine and North Reefs have been good for trout, snapper, and pearl perch. Micro jigs, soft plastics, live and floater baits have all gotten the job done, for those heading a bit further out the Barwon Banks have been producing bigger snapper, pearl perch, sweetlip, cod and cobia. Good schools of tuna have also been around Sunshine, Jew Sholes and in the bay, they are mostly mac tuna but there is the odd long tail amongst them.