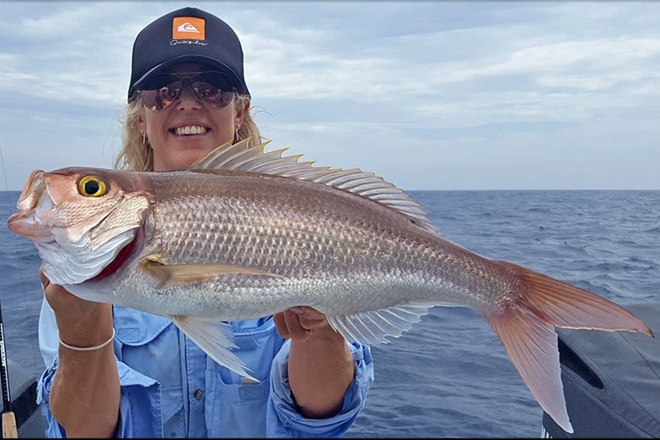 Pam Stewart from Buderim was more than happy with the quality rosy jobfish she boated at Chardon's Wide on Saturday's seven-hour Wild Thing 2 charter. Photo: www.fishingnoosa.com.au

Great fish on the outer reefs

Sunshine Reef is really firing, with quality grassy sweetlip and trout caught over the past week. Both North Reef and Chardons Reef have been fishing very well for good-sized snapper, maori cod, tuskfish, pearl perch and sweetlip. The pelagic season is really starting to get underway with a few spotted mackerel and the odd school mackerel on the close reefs. Tuna are also on the chew with some schools chopping up bait in Laguna Bay. For the bigger boats that have been able to brave the windy conditions the Barwon Banks and the reefs off Double Island have produced some outstanding fish, snapper, pearlies, moses perch, slate bream, trag jew, gold spot wrasse and Tuskies were all accounted for on a recent trip by one of the charters.

The Noosa River has again been fishing well, with great catches of trevally and tailor coming in. The predatory fish have been very active around the river mouth, Woods Bays and Munna Point chasing bait brought in on the big tides of late. Casting slugs and soft plastics at dawn and dusk is a good way to tangle with a solid trevally or two. Flathead are still in good numbers with some monster females feeding on small baitfish and prawns predominantly on the run out tide, whiting and bream have been common catches of late right throughout the system with the dog beach and Gympie Terrace both producing some good fish. Mangrove jack are now very active with the water warming up. These ambush predators have surprised a few anglers with their ‘smash and run’ feeding technique. Jacks are more active and often out in the open at night as they hunt for a feed. Live baits and soft plastics like the River2sea Chasebaits has got on the job done. Trolling hard body minnows in between the lakes will also see you connected to a jack or two. A few big threadfin salmon have been caught of late, also between the lakes and near the mouth of Lake Cooroibah.

On the beaches tailor are still making their way back south after spawning on the Fraser coast, good quality fish continue to be taken along the Noosa North Shore beaches with the high tide at night the most productive. Fresh Mullet, bonito and pilchard baits have nailed most of the fish. We are still seeing some larger greenbacks some touching the magic 10lb mark amongst them. Dart are in good numbers with most fish in close, prawns and small fish baits have claimed plenty. We are also seeing some good quality whiting coming from the breakers, live worms and pippies have been the go to bait.

On the freshwater; Lake Macdonald is still firing with bass spread throughout the dam. Casting around the weed edges early and late has been productive. Fishing the deeper sections of the lake once the sun comes up has also been very effective. Surface fly has accounted for some quality bass and saratoga. The dam wall and the structure nearby has been holding good numbers of quality saratoga. Up at Borumba there has been plenty of activity with bass and saratoga. The Kingham Arm has been fishing particularly well for bass and the toga are also active in the upper reaches. Borumba Dam is 16% lower than this time last year so take care in the creeks as there will be hidden timber just under the surface.