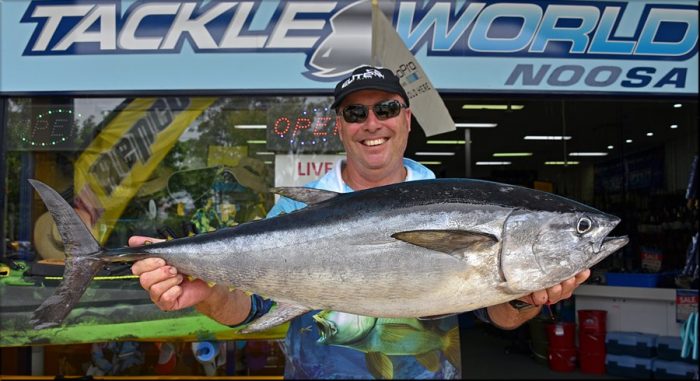 Mangrove jack have been plentiful in the Noosa River, good numbers of jacks have come from the lower reaches of the river, the ski run stretch and between the lakes. Live baits have been the most productive. Paddle tail soft plastics in the 4inch size have also been doing the trick. The Squidgy range of soft plastic are well and truly up to the task with white and red being the popular colours.

Families have been enjoying the river with plenty of quality whiting from the lower reaches. Gympie Terrace the dog beach and the Frying pan have all produced. Live worm baits,yabbies and pealed prawns have all securing some good catches. Good numbers of big eye trevally and giant trevally have come from Woods Bays and the Tewantin Boat ramp area early morning and late afternoon.

There has been the odd jew coming from the deeper stretches of the ski run on lures like the 20g Jackson pin tails. Good numbers of flathead on the outgoing tide from around the frying pan and in the woods bays. Gladiator prawns have been doing most of the damage as well as 140mm squidgy wriggler in clear gremlin colour taking the bigger lizards.

On the beaches; whiting have been in most of the close gutter on the incoming tide, freshly pulled live worms have been the pick of the baits with pippies also working well.  Jewies continue to be taken around the Coolum Rocks area.

With the persistent winds over the last week offshore anglers have been struggling, there were a couple of days earlier last week where the bigger boats made their way out. Good sized snapper and pearlies came from the Barwon Banks and the Hards, Sunshine Reef has again been one of the reefs where anglers will make a quick dash before the wind picks up. Halls reef and Jew Sholes have also been the go for a quick dash. Pelagics have been chasing the bait around these reefs with longtail tuna and the odd decent spanish mackerel amongst them.

Fishing the fresh water Lake McDonald has been producing some quality bass, plastics hopped around the weed banks has accounted for bigger fish.

Previous Crabs, Flathead and Mangrove Jack Around Tin Can Bay and Great Sandy Straits
Next Mackerel and Wahoo Around Caloundra