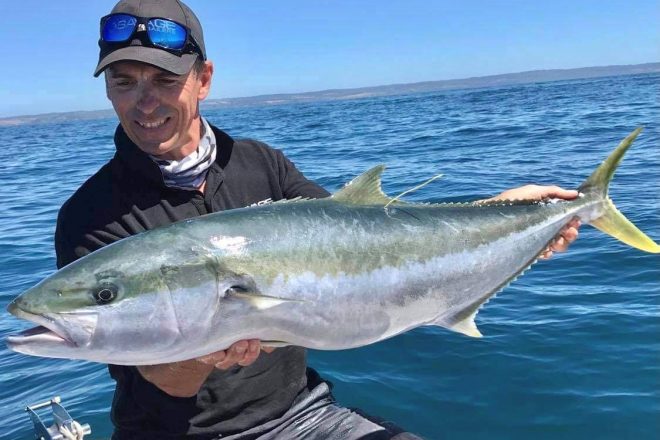 The kingfish, originally tagged near Melbourne, was recaptured off Sydney only 57 days later!

A kingfish originally tagged in Victoria has recently been recaptured. Sydney based charter operation, Raptor Fishing Charters, recaptured the kingie while fishing offshore of Sydney on 2 June 2021. Skipper, Emerson Spina measured the fish at 109cm! A search of the Game Fish Tagging database revealed that the fish was originally released only 57 days earlier on 6 April 2021 near Phillip Island, Victoria.

The fish was released by Victorian Game Fishing Club member and accomplished kingie angler, Jason Taylor (pictured), who was fishing aboard his boat Matrix. After a quick photo, Jason measured the fish at 108cm. The fish spent only 57 days at liberty and was caught more than 525 nautical miles (~970km) from its original release location, which means it was swimming at minimum of 17 kilometres per day.
It is believed their distribution and movement is influenced by biological and environmental factors including spawning events, food availability, water temperature and oceanic currents.

Each reported recapture contributes to our understanding of pelagic fish species. If you are lucky enough to recapture a tagged fish, please ensure you report it using our online recapture form which can be found here!

The Game Fish Tagging Program is a great example of your fishing fees at work!