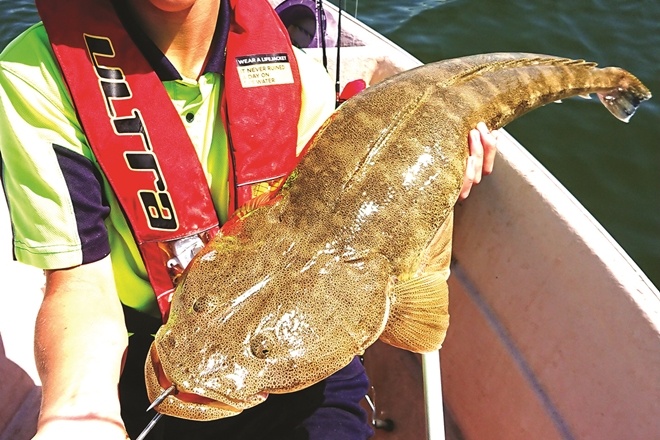 Toby caught this 91.5cm flathead which was the best of a good session.

WITH travel restrictions easing more, the upcoming holiday season is looking good for fishers. If you are thinking of coming to the Byron coast, the fishing has been decent. After storms and substantial rain, the river is a great place to be with all the warm water species now in full swing.

Hugh recently came down to the caravan park for another stint. I enjoyed a couple of days on the river with him and we even caught a couple of sizable fish. Drifting around the mouth of the river on a slack low tide, we were hoping for a big flathead but only managed a just-legal model. Lizards December

On the last drift, Hugh had the big hook-up we were anticipating and on 6lb braid, he angled the fish gently to the boat. Once under the boat, the tell-tale slow nodding of the rod tip indicated it wasn’t the big flathead we were targeting but a trevally circling on its side. I’ve written before that I reckon trevally are a first-class sportfish and I will never tire of seeing them come to the boat.

They don’t have to be the monster giant trevally that people pay huge bucks to chuck poppers at all day in exotic locations. The 1-2kg models that inhabit our local estuaries are a buzz on appropriate tackle. On a subsequent trip with Hugh, we once again chased big lizards.Lizards December

On the first cast, Hugh hooked a nice fish and upon seeing it was a good flatty we realised we’d left the net back at the caravan. There’s a manoeuvre called the comfort lift, and I’m sure you’ve seen it on TV. It involves gently lifting the fish into the boat by the belly and hoping it just relaxes and comes aboard with no fuss.

Turns out I’m rubbish at the comfort lift! What I can do though is the discomfort lift. This involves lifting the fish aboard with a thumb grip that causes pain and lacerations from the fish’s raspy teeth and the possibility of the hook ending up in a digit.Lizards December

With the fish in the boat, we went back, got the net and headed back up the river to look for trevally or flatties in the deeper holes at low tide. The trevally weren’t present but we jagged a few more flathead, with no monsters but a nice feed. Toby Hart had a red-hot morning on the lizards, and I happened to be there to watch him land the biggest of the session.

From my angle it didn’t look massive but as his dad Damien lifted it out of the water, it grew into a 91.5cm crocodile. I took a quick snap and the duo swam the fish carefully before releasing it. Flathead, trevally and whiting will continue to consume anglers’ attention in the river this month.Lizards December

Mangrove jack will also be on the cards. Hugh and I drifted past the end of a rock bar hoping for a flathead and within the space of a minute we both got wiped out by jack. I’m sure people have landed them on light line, but we stood no chance – it was over in seconds.

Mud crabs are starting to move around a bit more with the stormy weather and are quickly filling out their shells. A few of the crabs caught last month were green and empty, but a few rusties are beginning to emerge now. Offshore is usually a bit hard at this time, but by Christmas a few spotted mackerel might make an appearance if the water is right.

There’s plenty of bait around – if it stays the mackerel will be there when the water gets warm and blue. Out wider, a few small marlin and mahi mahi are cruising the currents. The other week I had a small black check me out.Lizards December

I threw an octopus out just to see what it would do, and the fish swam over and checked it out but didn’t eat. In close, there are a heap of pike, slimy mackerel and tailor, and it always pays to stack a good amount of these in the freezer. Occasionally, schools of little bonito show up in December too and these are prime.Lizards December

I reckon I might dedicate a couple of bait fishing trips so I’ve got something to feed the mackerel when they turn up.