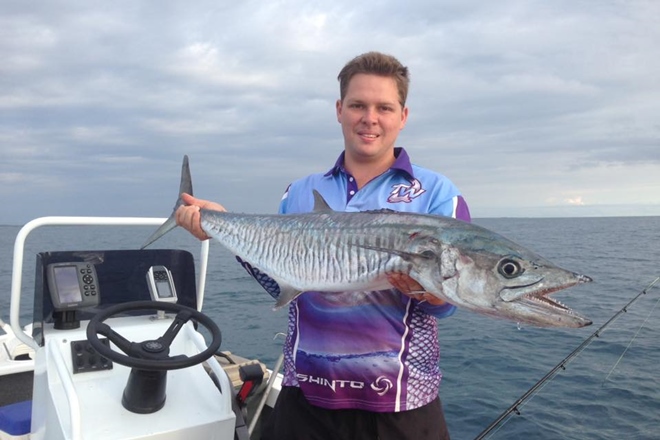 I hope everyone has recovered from the Anzac long weekend.  Unfortunately the weather wasn’t great, but it was still good to see that some good fish were caught around the Bundaberg area.

With a bit of luck, the forecast is looking a lot better for the Labour Day long weekend, with Sunday and Monday looking fantastic.

Even though it has been extremely windy this past week, the Burnett River has still been producing the goods.  Good numbers of prawns are still in all the usual haunts, with Millaquin Hole and Rubyanna Creek both worth a crack.  We’ve heard good reports of both summer and northern whiting, big grunter, blue salmon, the odd threadfin salmon, bream, estuary cod, and the amount of nice flathead caught this week was amazing.

The Kolan and Elliott rivers have also been fishing well with some cracking summer whiting caught around the sand bars, mainly on fresh yabbies.  Further upstream, both systems produced a few mangrove jack, big bream and flathead.

Lure fisherman using soft plastics and small metal vibes have all reported doing well in all the local rivers around Bundy this past week.  Lures like the Jackson Pan Vib and the good old 4” Swimming Mullet from Gulp have been two standouts this week.

We have not had many reports on Lake Gregory’s bass this week, but Lake Monduran’s barra have really fired up.  Lots of barra between 90cm and the magic metre have been hooked.

Rob from Guidelines Charters has told me that it’s been one of the most productive weeks on the barramundi this year.  Casting around the back of bays and shallow wind-blown points with hard body lures that suspend or slowly float has been accounting for most barra.

If you’re thinking of a destination for this weekend, Lake Monduran Holiday Park would be an excellent option.  The park has plenty of both powered and non-powered sites as well as cabins and a house-boat on the dam.  This is a magic time of the year to catch a barra at the dam and you might even see me up there over the long weekend.