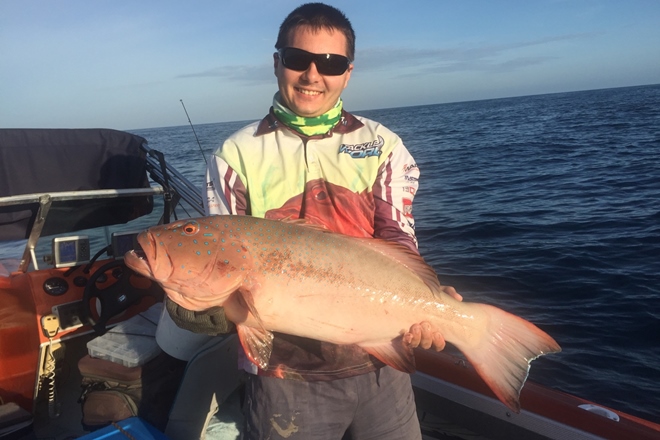 How good was last weekend?  The weather around the Bundaberg area was fantastic and it looked like the fish were on the chew!

Anglers made the most of the Labour Day long weekend, and a lot of the bigger boats took advantage of the magic conditions and headed offshore.  By all reports, most boats did really well catching mixed reef species including red-throat emperor, grass sweetlip, coral trout, parrot, red emperor and the odd mackerel out further.

Even the smaller boats got a chance to sneak out to the inshore reefs and did very well.  All the close reefs were active with bait fish, with pelagic species like school mackerel, spanish mackerel and longtail tuna smashing through them.

Most of the mackerel were caught on live baits but a few switched-on anglers have been hooking plenty of spanish mackerel and tuna using large surface poppers.  This technique is very visual and gets the heart pumping as these speedsters smash the lure popping on the surface.

All of the local rivers around Bundaberg were busy but produced plenty of fish.  This is a good time of the year to target good numbers of flathead in the shallows on soft plastics.  Lures such as the Squidgie Wrigglers and Gulp 4” Swimming Mullet both worked a treat last weekend.

Good numbers of trumpeter, bream, whiting and the odd salmon were boated last weekend as well, by using soft plastics and fresh baits.

By the sounds of it, a few prawns are still being caught in the Kolan and Burnett rivers in the deeper holes.  The quality of the mud crabs has also improved over the past week or so.

On the freshwater scene, the Australian bass fired up at both Lake Gregory and Lake Lenthall over near Maryborough.  Big bass were smashing both Spinnerbaits and Jackall TN60 lures at both locations.  Lake Lenthall has started to clean up and it looks like the barra and bass are back on the bite.

Last weekend I took the family camping to Lake Monduran.  We all has a great time and I heard of a heap of barra caught.  The amount of small barra between 45-50cm hitting lures was awesome.  These fish were put into the dam as fingerlings late last year, so the future for Lake Monduran is looking bright.  A handful of bigger barra between 90cm and the magic metre were also caught.

Let’s hope the action keeps up over the next few weeks.