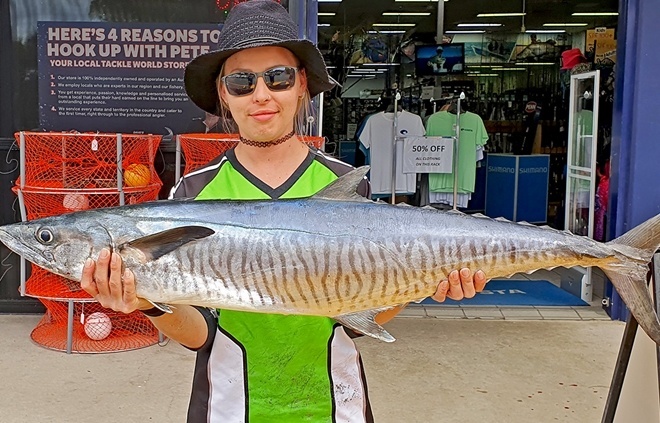 Gympie girl Kyra Mitchell won the $100.00 Tackle World Noosa/ChaseBaits Fish of the Week prize with her first ever Spanish mackerel. She boated this 10kg specimen at Hall's Reef in Laguna Bay. Photos: fishingnoosa.com.au

Make the most of mackerel madness

Well here we are, another month gone and we now find ourselves enjoying great potential if only the rain and winds would stop. May and June will see a period of time where the last of the summer pelagic fish are still about but will soon be off to warmer waters. The start of the winter fish will become apparent with snapper starting to get larger and closer to the inshore reefs rather than the deep reef out wide like The Hards and The Banks.

With the bad weather this week offshore was on hold. When the swell drops you need to not only be focused on surface and subsurface feeding fish but deep down on the bottom. Most anglers will drop baits this time of year while on anchor. Nothing beats the versatility of an electric motor. Rather than holding ground you can control your drift with pin point precision to best fish an area holding fish so be sure to check them out in store. Flicking soft plastics for snapper or jigging and even unweighted baits all do very well on Sunshine Reef while drifting as the bottom has some great structure. The Shimano Baku jigs are going to clean up this year on the snapper and pearl perch as they can be fished in hard currents and deeper water like North Reef. This is due to their compact heavy head which gets down fast and the legs which create a lot of interest. Be sure to keep rods in hands and not in rod holders as bites can come thick and fast.

Surf fishing has also been on pause this last week as the winds have mainly come from the south east. Those in the know fished the various headlands and with the correct tide anglers reported smaller mackerel and tuna on the catch list. These fish taking slugs and overweighted jerk shad style plastics cast out 80-100m+. Be sure when you rock fish to do it in pairs for safety and carry a landing gaff. If wanting to get started in rock fishing for bigger fish the prevail range of rods from Penn have you covered. Pair these up with a slammer for a well-balanced combo more than capable of stopping a big tuna.

With the river starting to run clear the fish were improving with flathead, small diamond trevally, undersize jewfish, bream, whiting and the occasional mangrove jack featuring. With the heavy rain things will change and as such efforts should be around the lower estuary. The reason for this are due to the salinity content changing and with additional water coming downstream this pushes baitfish, mullet and prawns out to sea and the fish will follow the food. If you are a soft plastic angler the Atomic Plazo prong will be a great choice. This plastic is heavily scented and has a lot of moving parts which a lot of fish love. Fish these on light jigheads and let them drift in the current so they look natural. Ask us how to tie a loop knot if you aren’t using one. Bait anglers will do well with oily fresh mullet and small herring which we also have in store. Try to fish around any points or areas where currents aren’t very strong. Noosa Sound is one such area when the winds blow hard from the south east because it is protected. If you are looking for live beach worm we have these and nothing beats this as bait for whiting and bream. Try around the Gympie Terrace, Munna Point and the dog beach for both whiting and bream.

Freshwater continues to prove a game of patience and searching around for bass anglers. These fish aren’t in big schools in Lake Mac but it pays to nose into bays and work the edges especially as it is now spilling at 103% capacity. If on the troll you will certainly find smaller mid 30cm sized fish and smaller hard bodies around 70mm in length are a great start. Look at the Zerek Tango shad for a consistent performer that won’t break the bank. Borumba hasn’t changed its level and it remains at 82%  so as always extreme care has to be taken in the timber and it pays to play it safe and navigate with an electric motor. In the main basin there are schools of smaller bass and these can be jigged or vibed up. An older often overlooked lure is the Ecogear ZX blade. This once hugely popular lure has dropped off the radar in recent times but still proves to be a great bass lure due to the huge vibration it emits. Cast this out and slow wind it back especially on shut down or deeper fish.

Now for all the  latest information log onto www.fishingnoosa.com.au for up to date bar and fishing reports, don’t forget to drop into Tackle World Noosa, Noosa Boating and Outdoors and Northshore Bait & Tackle in Marcoola for all the right equipment, bait and advice to get you catching. Be sure to follow us on Facebook and remember Tight Lines and Bent Spines!