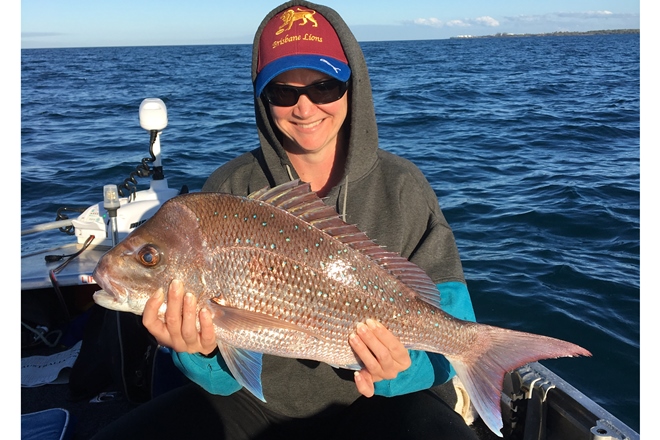 Finally, the weather forecast for this weekend looks favourable for the reef fishermen to venture out to the outer reefs off Bundaberg.

With the full moon last Wednesday night, the tides should be starting to ease and with the light winds predicted, it’s looking like it will be a top weekend to be on the water.

By all reports there have been massive schools of baitfish on all the popular marks offshore.  The number of small black marlin that have showed up chasing the baitfish is amazing.

We have heard of at least three small blacks caught and released during the past fortnight.  If this continues it’s shaping up to be another exceptional marlin season over the next few months.

Most of the mackerel have started to quieten off but the amount of squire, snapper, large grunter and small-mouth nannygai that are being caught on all the reefs closer to the shore has been awesome.

Tailor is another species that has showed up with the cooler weather.  Good numbers are being caught around the mouth of the Elliott River and along Coonarr Beach.

Good numbers of tailor, jewfish, trevally, dart and the odd spanish mackerel have been caught along the beach at Fraser Island.  Spinning metal lures and floating ganged pilchards out have both been working well.

The winter whiting have been providing plenty of entertainment for the whole family from Woodgate up to the whiting grounds off Bundaberg.  One of the hot baits for these winter whiting has been the Gulp Sandworm, cut in small lengths and put on a size 6 long shank hook  – this has been working a treat.

With the warmer weather this week Lake Monduran could be worth a look.  The barra will be looking for the warmer water.  Shallow, sandy points and bays with the wind pushing onto them will definitely be worth a crack.  Although the water temperature will be low, the fishing can still be red hot when you locate the schooled barra.