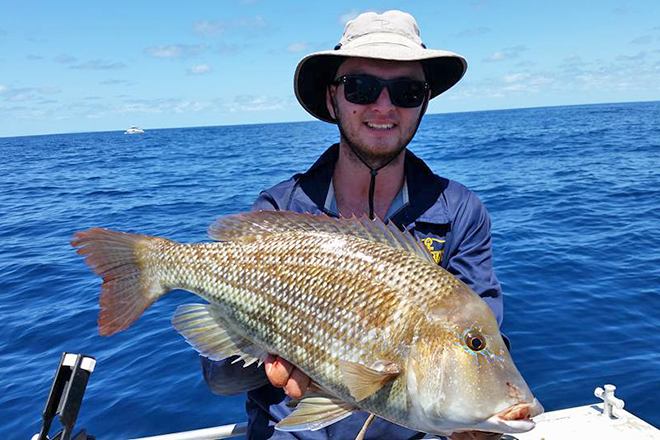 Corey Cronin with a nice grass sweetlip he caught of Bundaberg last week.

Mixed bag on offer around Bundaberg

It’s been another great start to the year on the fishing scene around the Bundaberg region.

Unfortunately the south-easterlies are predicted to pick up to around the 20-25 knots this
weekend, restricting any offshore fishing trips.

The good news is that the bigger boats that headed out last weekend all reported landing a
quality mixed bag, including parrot, sweetlip, hussar, cod and the odd spanish mackerel. The
only down side was the mount of sharks, and most of the better fish that were hooked were
taken by them on the way up.

The Burnett River has continued to fish very well with good reports of grunter up to 60cm being
caught on a regular basis. At this time of the year the grunter are responding well to soft
plastics, with the Gulp 4î Swimming Mullet rigged on a quarter ounce jighead being one of my ìgo toî
lures.

When fishing the Burnett, try fishing the first of the run-in tide. This is when some of the better
sized fish have been hooked.

Other species include flathead, mangrove jack, barramundi, blue salmon, estuary cod and
queenfish, which have all been caught in all of our local rivers and creeks this past week.

The first Bass Nation Barra round was held up at Teemburra Dam, west of Mackay last
weekend and it was awesome to see two Bundy teams finish in the top ten ñ against some of
the best barra fishermen in the country.

Back closer to home, Lake Monduran is fishing very well. I believe the dam fishes best in March
and April as the water temperature starts to fall. The barra then start hunting bait up on the
shallow flats, which makes them easier to target.

The dam is currently falling around six inches a week and new snags and weed islands are
showing up every day. All of the smaller barra caught this week have been around the 60cm
mark and in top condition, so if all goes to plan, these fish will be up to 80-90 cm by the next
summer, making Lake Monduran the place to come to hook a big impoundment barra once
again.