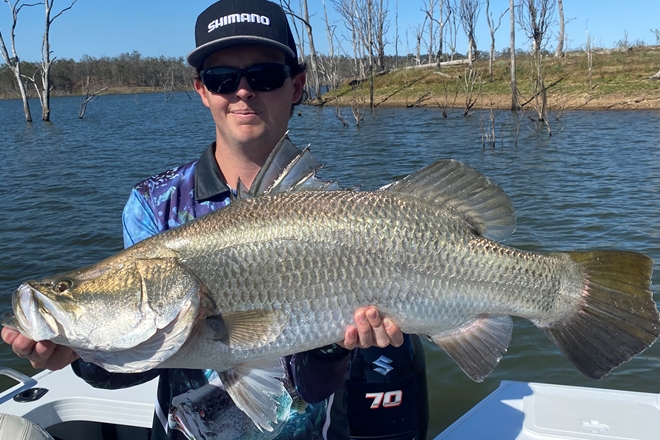 Mitch Beyer with the nice Barra he caught at Lake Monduran last weekend.

The schoolie mackerel have turned up along the Bundaberg coastline in awesome numbers over the past week.  Pretty much every patch of structure from Burnett Heads to Elliott Heads that holds bait will have mackerel all over it.  Even the guys fishing off the rocks have been getting their share.  Fast-retrieving metal slugs and lightly weighting pilchards will get you the bite.  I usually only run 60lb fluorocarbon leader.  There’s still been some trophy sized grunter getting around on the inshore reefs.  Fishing for them in the late afternoon into the night seems to be the best bite time.

The Burnett River has still been producing some of the best flathead fishing I’ve seen!  Plenty have been caught around the port area.  Slow-rolling paddle tail soft plastics and using sprat as bait have been the standout techniques. I’ve heard of a few barra starting to get caught in the Burnett as well, so definitely throw some of your soft vibes in the deep holes and around the bridges.  Remember to fish one hour on either side of low and high tide while chasing barra.  Don’t forget to keep a cast net in your boat because there’s still some really nice prawns getting around.

The mangrove jack are starting to chew in both the Kolan and the Baffle systems. The Zman 3” Minnowz has been getting most of the bites.  The flathead and grunter have still been in good numbers towards the mouth as well. There’s also some solid queenfish chasing the bait at the mouth of the Baffle so make sure you have a popper in the boat if you want to get some super fun surface action.  Don’t forget to throw the crab pots in as well –  with the full moon this week the bigger tides will have them moving.

Lake Monduran is definitely the standout place to fish around the Bundaberg region at the moment.  With plenty of the barramundi being caught now so close to a metre, it’s getting super exciting.  Fishing the wind-blown points and bays is the key.  The Jackall Squirrels and  Samaki Redics are getting plenty of the bites!  Remember to fish with confidence and you’ll be sure to get one.