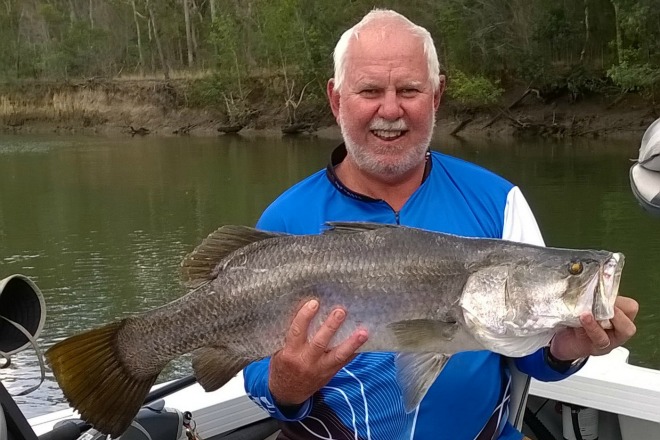 Gary Bartholdt with the barra he caught at the Baffle Creek Family Fishing Festival last weekend.

Finally, the Bundaberg area received some well-needed rainfall.  It’s amazing how we can go from dust to lush green grass in only a couple of days.

Good news is that the wet weather has got the mud crabs n the move with some nice crabs caught last week.

Some of the Tackle World boys fished the Baffle Creek Family Fishing Festival which was held last weekend.  Whilst the lads didn’t and as many fish as they had hoped, they did manage to land two nice sized barramundi just prior to the barramundi closure the kicked off at midday on Sunday, 1st of November.  By all reports there were quite a few fish caught and everyone enjoyed the weekend and won some great prizes.

As I mentioned earlier, a few mud crabs have fired up in the Burnett.  Hopefully this only improves as we get closer to Christmas. With 10 – to 15 knot northerlies predicted this weekend it once again looks like most of the fishing action will be restricted to our inshore reefs and local rivers.

The word is that good numbers of school mackerel are cruising right along our coastline at the moment and good sized grunter, mangrove jack, bream and flathead are smashing both lures and fresh baits during the past week in the Burnett.

The offshore fishing has been very limited because of the weather.  Try fishing the inshore reefs like the Cochrane Artificial early, where there’s been a few squire, sweetlip, grunter and school and spanish mackerel being boated when the weather allows.

Keep in mind that the second Coral Reef Fin Fish closure will be in place next week from Monday, 9th November to Friday, 13th November.

Lake Gregory is once again at 100% capacity, which makes launching your boat easier.  The two hot techniques at the dam last weekend were fishing the weed edges with surface lures early as the sun is coming up and similar areas and the timbered bays with Spinnerbaits later in the day.

Lake Monduran is still producing a few barra last weekend.  I’ve heard of a few smaller barra caught from 50cm to 60cm on Jackall Squirrels with the rainforest and bay in the back of the north arm of B Section both holding good numbers of barra last weekend.