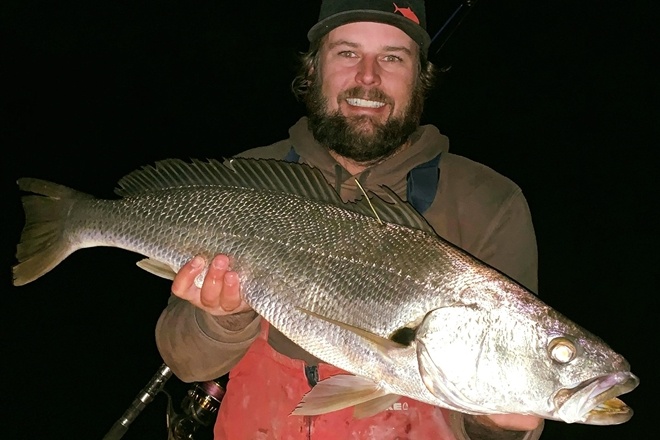 Mulloway recaptured … for the third time!

A SCHOOL sized mulloway originally tagged and released in the Shoalhaven River by an unnamed angler on 31 March 2020 has been recaptured…. for the third time!

Including the original tag and release, the fish has now been caught an unbelievable four times in just 186 days. The recapture summary is as follows:
Originally tagged in the Shoalhaven River on 31 March at 80cm.
• Recaptured and released 32 days later in the Shoalhaven River on 2 May at 81cm by well-known local angler Guy Jamieson (pictured).
• Recaptured and released 93 days later in the Shoalhaven River on 3 August at 85cm by an unnamed angler.
• Recaptured and released 61 days later on 3 October north of Wollongong at 85cm by another nameless angler.
Overall, the fish spent 186 days at liberty and travelled more than 50 nautical miles (~90km) between release and recapture locations.
These multiple recaptures highlight that mulloway are resilient to catch and release as long as good handling techniques are implemented.
It also gives researchers valuable insight into movement patterns of the species.
It’s particularly interesting to note that this one fish has “made the day” of four different anglers. The old adage that “some fish are too good to catch just once” certainly seems to ring true in this case!
The Game Fish Tagging Program is another great example of your fishing fee at work!