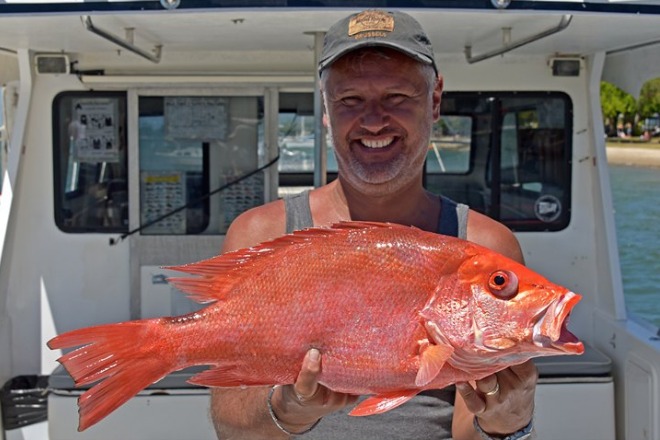 The bream and whiting population are still in good numbers around the river mouth area, they have been responding well to live baits like beach and blood worms as well as yabbies.

Surface lures like Bassday Chrystal pops have been the proving a success on the whiting along with small soft plastics like Keitech Easy Shiner in the 2” size perfect for the bream. Flathead have been in great numbers throughout the Woods Bays and outside the Munna Point Caravan Park.

Trolling the Strada Dredge 70’s around 3 knots has been seeing success early morning and late afternoon. Also soft plastics like the Boom Bait 3” bomb shads has been proving there worth with a constant super slow roll along the bottom and over the drop offs. During the low light hours trevally and mangrove jack have been on the chew around the back of the Noosa Sound, Woods bays and river mouth car park. Fresh mullet rigged using a snelled rig with 2 5/0 Hayabusa hooks has been the popular rig.

The Tewantin stretch of the river has also been producing trevally, tarpon and jacks during the night. Poppers like the Jackson Pygmy’s and hard soft plastics like the Prawn Stars have been getting the fish.

Heading offshore, Laguna Bay has been absolutely going off during the day with constant sightings of tuna and mackerel breaking the surface feeding on small bait fish. Arma Slugs in the 15-40g range have been the go to lures on the tuna and mackerel. Try to avoid using wire as fish will see it, using a 40-60lb fluorocarbon leader will give you the advantage. Sunshine Reef, North Reef and Chardons have been the go to spots for Spanish mackerel trolling Strada trackas, the new river2sea 160 Turbo’s and metal squirted lures has also been the go.

Sunshine Reef and North Reef has been producing some nice fish from the bottom, coral trout, snapper, sweetlip and tusk fish, all have been responding well to squid, pillies and live baits.

North Reef has been the go to destination for nice sized cobia up to 15kg.The wider reefs like Double Island  and the Barwon Banks have been holding red emperor up to 15kg, samson fish, king fish and amberjacks, big pencil styled jigs and fishing the bottom with live baits have both seen some outstanding results.

This is the last week of the MACKEREL MANIA COMPETITION that Davo’s are running during January. With the spotted mackerel coming on the bite you’ll have the chance to win a $500.00 gift voucher! To be eligible, bring in your best spotted mackerel to be weighed, measured and photographed. There will be points awarded for length, weight and condition of the catch and bonus points for best smile and best story. The winner will be decided on January 31 and announced as soon as possible after that date. Both Davo’s stores (Noosa and Marcoola) will be accepting entries.