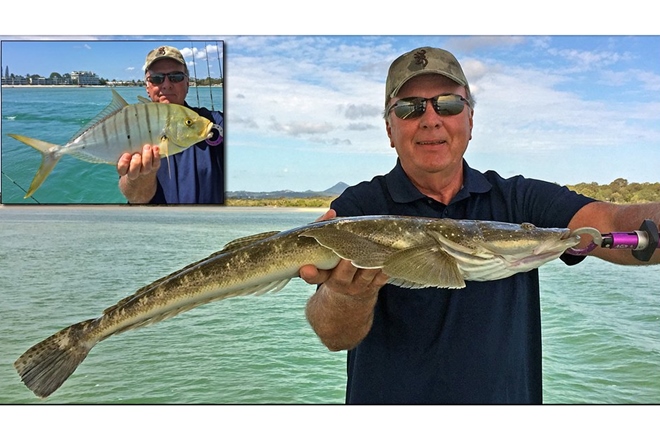 Threatening stormy weather and a storm on Saturday afternoon has made the mangrove jack very active in the Noosa River, with 50cm-plus fish caught in areas such as Johns Landing. One popular lure that is showing results is the Fish Candy Jack Hammer 98mm. Live baits such as herring or biddies or slabs of bonito are irresistible to big hungry jacks. Try drifting you’re offering into structure and hang on tight. The river continues to fish well with great catches of trevally and flathead of late.

The trevs have been very active around the river mouth when using surface lures like Zipbait Skinny Pop 90mm near Munna Point and up near the first ski run particularly at dawn and dusk. The flathead have commenced their spawning congregation and as such they will be found in groups comprising a couple of large hen fish and a gathering of lusty males.  As such it is important to release the larger fish to assist with their reproductive pursuits. Drifting frog mouth pilchards on small ganged hooks is a great way to tangle with a few flatties. Trolling bibbed minnows and casting plastics will also bring some quality fish undone.

As usual when the jacks fire up so do the mud crabs. Good catches of muddies have been reported of late with mullet the preferred bait. Change the bait daily for best results.

Sunshine Reef has been a little slow of late so most anglers are concentrating their efforts on North Reef, Chardons Reef or out wider when conditions allow. There are still some quality snapper about along with excellent pearl perch, grass sweetlip and tusk fish. Barwon Banks have seen some red throat emperor starting to fire in the 40m mark before sun up. Reports of mackerel are starting to trickle in and it seems there are plenty to the north and south so it won’t be long until the pelagic season kicks into gear. The new DTX Minnow from Nomad is going to be a winner on the Spaniards. It is a self-tuning deep running bibbed minnow and it can be trolled at 12 knots which is outstanding. They are available in a great range of colours and two sizes – 165mm and 200mm. They will run at 12 metres plus which is perfect for tuna, big Spanish mackerel and a host of other pelagics.

Lake Macdonald continues to fire with bass widespread. Casting around the weed edges with small vibes or plastics has delivered some quality fish as has surface fly at dawn and dusk. Entice Assault Vibes seem to be the popular pick. Bait anglers are catching quality bass and catfish particularly along the bubble trail. Live shrimp which are easily caught around the lakes verges are a gun bait. Lure casters are tangling with some serious Saratoga particularly around three ways, along Fry’s Run and in Bass Bay. I find using the ¼ ounce Bassman spinnerbaits are a great tool for ‘toga’. Borumba Dam has seen bass and Saratoga succumbing to spinnerbaits and plastics. Make sure to have a cast around the timber at the top of the main basin. Finally there have been a few silvers within the Borumba Arm.