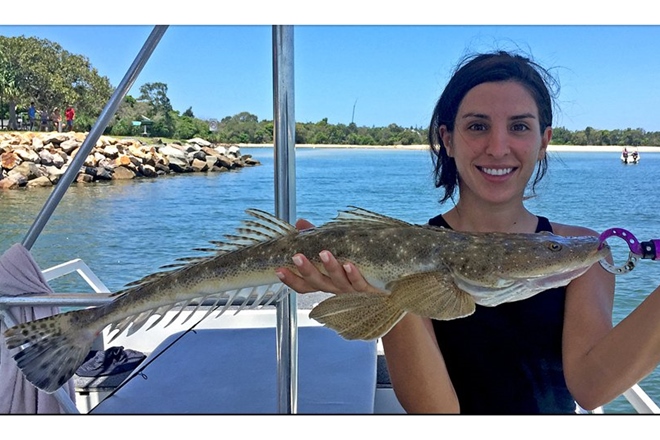 Jessica Chiodo caught a 68cm flathead on a whitebait at the mouth. She was on a Noosa River Fishing Safari at the time. Photo: www.fishingnoosa.com.au

In the Noosa River, bream and whiting have been on the bite throughout the upper reaches of the river with the Frying Pan and Dog Beach flats both producing goods numbers of fish. Fresh or live bait like pipis and beach worms have been the key to success fished on a size four longshank hook. If you want to try something different surface lures like small poppers and surface walkers are great to use on whiting and many other river species.

Designed to imitate a fleeing prawn the Jackson Ebi Panics are a very life like presentation that will see angler reaping the rewards. Big flathead have been on the bite at the River Mouth car park rocks, along the current line out from Munna Point Caravan Park and also up Weyba Creek, drifting fresh mullet strips and live baits like herring, poddy mullet and winter whiting on a snelled rig using 4/0 octopus hooks has proven successful with the possible bi-catch of mangrove jack or mixed trevally species.

Pelagics like trevally, tailor and queenfish have been feeding high in the water column with surface lures again fished on the top of the tide being the best way to catch them, give the new River2Sea 75mm Baby Bell poppers a throw as with an exaggerated cup face they will push plenty of water which in turn will attract many inquisitive pelagic species in. IF fishing after dark try the innovative Ballista S-pop 75, with their bonus built in red l.e.d flashing light which activates with contact on the water.

Further upriver, mangrove jacks and school jew have been on the bite in the early mornings between the lakes with fish falling for a well presented soft vibe. Do yourself a favour and pick up a Fuze vibe and when fished with a slow double hop retrieve you may just be rewards for your efforts.

On the beaches; when driving off the barge and onto Noosa’s Northshore take the first cutting and come back towards the river mouth with goods numbers of whiting, dart and bream coming through on the start of the run in tide. Again live worms being the best bait along with peeled prawns and fresh mullet. Nights fishing in the gutters along Teewah beach has produced the odd big jew along with tailor and trevally.

Offshore; if you’re after a feed of pelagics then try fishing North Reef and Chardons Reef for spainsh mackerel up to 20kg. Metal slugs dropped to the bottom and jigged or spun back to the boat has been a great way to come in contact with one of these speedsters. Trolling deep diving hardbodies around the reef edges in both the early morning and late afternoon has also been working well. In-close Little Halls and Jew Shoal have been fishing well for grassy sweetlip and squire.