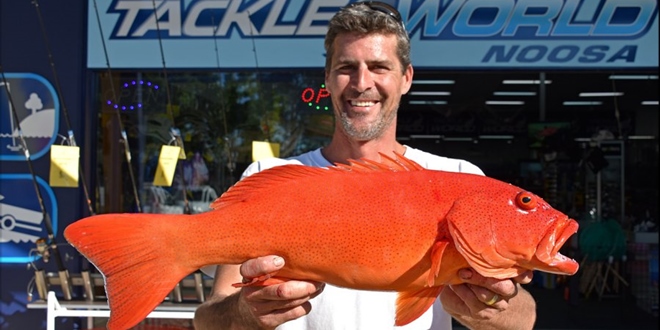 With the wind up for most of the week the offshore seen was not the best. Most fish caught offshore this week were taken in the earlier part of the week.

North Reef again was one of the favorite hunting grounds and the charters headed up there with some great results.

Jew seem to be hitting the decks with regularity with plenty of quality fish landed, mackerel are also still around with good quality fish also taken.

Other reef species from North Reef where cobia, sweetlip, snapper and the odd pearl perch. Local reefs like Hall and Sunshine also produced the good earlier in the week, with sweetlip, Maori cod and coral trout from Sunshine and tuna from Halls Reef.

On the river the wind was also a bit of a pain more from a comfort point of view as the fishing was red hot, the lower reaches of the river has been where most of the action has been with the river mouth one of the hot spots for land based anglers.

There have been some good mixed schools of trevally, and tailor moving in on the incoming tide fast moving Micro jigs and slugs cast out with a fast retrieve have worked well when the fish are thick.

There has also been some really stonker  bream on live bloodworms, with the odd jew and jack on soft vibes like the Fuze Pulse and Fish Candy vibes.

In the Frying Pan, heaps of whiting and bream are being taken on live bloodworms.

Surface lures have also producing some good fish on the run out tide.

Woods Bay has seen Mixed schools of trevally throughout the outer bay and current line.

Micro jigs have been extremely effective with the favorites being Xesta, Blue Blue and Shout jigs in a variety of weights depending on the stage of the tide.

Soft plastics have been producing the goods with the Squidgy Prawns, Keiteck Easy Shiners and Fuze prawn heads all coming up with the goods.

A few good size tailor being caught, surface poppers and stickbaits have been working well early morning and late afternoons.

Up on the Ski runs the water is starting to clear and fish are starting to follow the bait back up the river.

The stretch between Harbor Town and the Ski run has produced a mixed bag including trevally, grunter bream , jacks, jew and the odd tailor.

Now for all the  latest information,  log onto www.fishingnoosa.com.au for up to date bar and fishing reports and don’t forget to drop into Davo’s Tackle World Noosa or Davo’s Bait &Tackle Northshore at Marcoola to find out what’s biting and where, and remember: Tight Lines and Bent Spines!