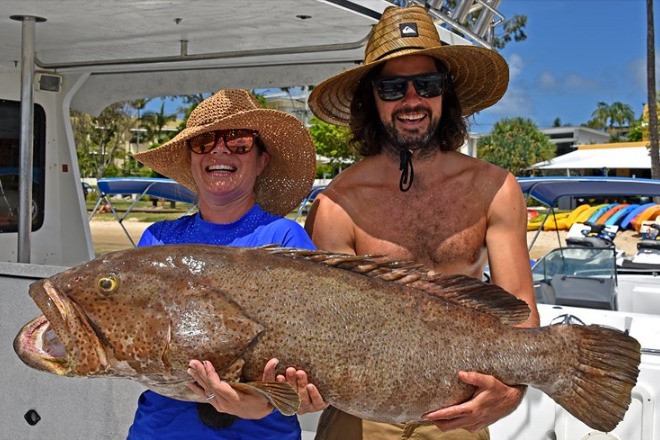 The Noosa River has again been the saviour of a lot of anglers as the winds still seem to be at that annoying 15 to 20 knot mark.

This is just enough to keep smaller craft from venturing out and sticking to the river. Flathead fishing has really started to pick up over the last couple of weeks. The channel in Lake Cooroibah as well as the deeper section at the mouth of the lake have seen some quality fish landed. Drifting whole fish baits like frogmouth pilchards and hardy heads has been successful.

Prawn profile soft plastics and the new Fish Candy Curly Vibes in the 85mm have also been very effective. The Noosa River mouth has also been fishing well for large flathead on the run out tide, live herring have claimed some monster females.  Using live baits and fished late into the night around heavy structures has been producing some outstanding mangrove jacks. Fishing the run out tide after a warmer than usual days seems to be the pick of the times to chase these fish. Live mullet or herring caught using a cast net and kept alive in an aerated live bait bucket have been the favourite food of these red devils.

There have been some good whiting taken from around the Dog Beach and Munna point areas.

Bream have been in good numbers right throughout the system. Some popular spots including the Gympie Terrace stretch, dog beach, Tewantin boat ramp and river mouth. Fresh mullet strips and salted bonito seems to be working best. After a fish last Friday night, the Trevally in Woods Bay were prolific, big numbers of fish were feeding on the surface and where happy to take darker coloured poppers and surface walkers, we had success with the Sammy’s from Lucky craft and the Baby Bell poppers from River2sea. We are still see seeing good quality muddies caught in pots set in deep water near the mangroves and left in for at least one full tide. Fresh bait is a must!

Beach angler have been getting some great fish over the past week after the big swells, there are good gutter all up the beaches, try to concentrate your efforts around the top of the tide. Dart, whiting and bream as well as tailor and smaller jew have all come from the gutters along Noosa’s North Shore.

Consistent winds are proving difficult for anglers to venture offshore, larger craft are heading out and concentrating their efforts around the closer reefs.  Sunshine has produced some lovely coral trout as well as sweetlip and large cod. Large Spanish mackerel have been cruising around the main reef system at Sunshine. Trolling hardbodies like the Fish Candy turbo 160 or fishing slow trolled live yakkas or slimies on a stinger rig is proving the best options.

In the fresh water, the Yabba and Kingham arms of the Borumba Dam have been seeing some exciting saratoga action. An early morning fish with surface walkers like the 85mm Strada Zeida in bright colours has claimed some nice fish.