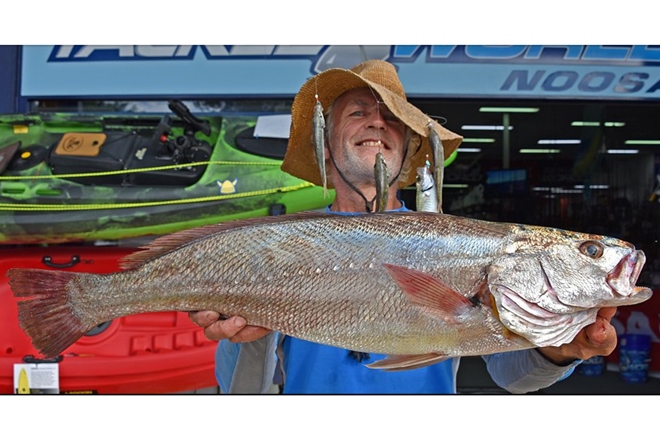 Local yak angler Peter 'Pedro' Doff stopped in at the shop on Thursday with some quality fish and a carefully prepared 'Fishy' hat, all ready to enter the Crazy Costume Competition. Photo: www.fishingnoosa.com.au

In the Noosa River, the majority of the action has been in the lower reaches of the river. Trevally have been feeding throughout the lower estuary with early morning and late afternoon being the peak times. Prawn baits or soft plastics like the Fuze Prawn head have been catching a lot of the fish with cale cale, diamond, golden and giant trevally all accounted for.

The blackfish have been active around the river mouth carpark rocks. Coolum cabbage and the last of the run in tide has been the most successful combinations. Night time has still seem some quality winter mangrove jacks being caught on fresh flesh baits and live baits, again the river mouth rocks and the sand bags near the dog beach have been a couple of prime spots. The deeper area just out from the Coast Guard has seen some nice fish taken including jew and flathead, the back of the sound and the lower stretches of Weyba Creek have also seen some quality flathead being caught. Flicking paddle tail plastics or trolling lures like the 50mm Zerek Tango Shads have tangled with some nice big mommas!

The rain has pushed some quality mud and sand crabs into pots baited with fresh mullet around Weyba Creek and the entrance to the first lake. Bream are in good numbers throughout the river system, fishing lightly weighted prawns and mullet flesh will keep the kids entertained for hours over the school holidays.

On the offshore scene, quality snapper have been on the chew on North reef. Lightly weighted pilchard floaters fished through a berley trail have been the bait of choice. With 5 and 7 inch jerk shad style plastics also accounting for their fair share of the fish. Amongst the snapper have been some trag jew, pearlies and quality sweetlip. Chardons Reef has seen pearl perch, parrot, jew and snapper coming from the bottom.

Quality squire have also come from in close, with Coolum and Sunshine Reefs giving up some good sized table fish. Big longtail tuna are still lurking around the close reefs eating slugs, floating baits and surface presentations, if you come across a school work the edges of the school so you don’t spook them straight away. The reefs off Double Island Point and the Barwon Banks are again fishing well for snapper, pearlies, red emperor and cobia.

On the beaches, Peregian has been the spot to catch bream, dart and the odd trevally. Live beach worms being the bait of choice. Tailor have been caught in good numbers with the evenings the best time. Slugs and micro jigs cast far out have claimed some of the bigger fish. Schools are moving up the coast feeding on schools of bait that have been flushed out of the rivers, so best to concentrate your efforts around the river and creek mouths. Jew have again been caught throughout the night along the North shore and the top end of Sunshine Beach.

Now for all the latest information log onto www.fishingnoosa.com.au

For up to date bar and fishing reports, don’t forget to drop into Davo’s Tackle World in Noosa or Davo’s Northshore Bait & Tackle at Marcoola to find out where the fish are biting.