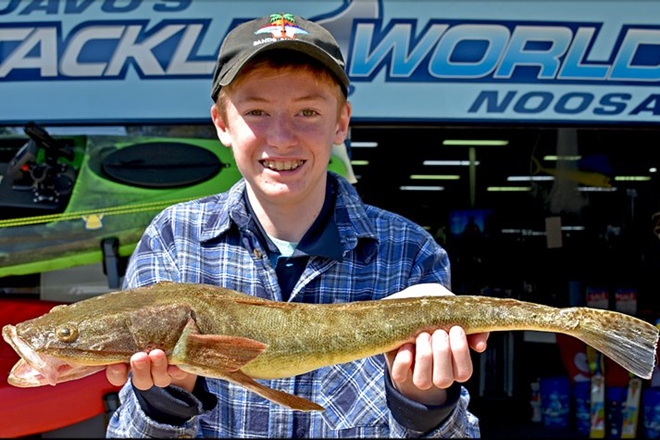 Joel Tobin from Tewantin caught this 60cm flathead on a pilchard. Photo: www.fishingnoosa.com.au

October the month for flathead

October has to be one of the best months to target flathead in the Noosa River. There have been some monster flathead being caught using drifting live herring baits or soft plastics like the Chasebait curly tail 3” from River2sea. The popular spots to target flathead have been the ski run, sand banks around the river mouth, Weyba Creek and the mouth of the first lake. Whiting is another species that really come on line in October, live worm baits and live yabbies have been producing some quality whiting in the lower reaches of the river. Fishing light with an extra-long leader and fine gauge hooks has seen the better whiting caught. These great table fish have also been attacking surface lures worked over the top of a shallow sand flats. The Strada Viral 70 has been the choice of surface lures for this scenario. Mangrove jack have been lurking around any heavy structure and hunting for a feed throughout the dark hours. They have been more active after a hotter than normal day. Live baits and fresh flesh baits are the best option for these fish. Mud crabs and sand crabs are being caught throughout the river. Pots that are set for a full tide change and baited with fresh mullet have being getting the best crabs.

On the offshore seen; good snapper have been on the closer reefs like Jew Shoal and Sunshine Reef during first and last light bite periods. Cobia are still in great numbers and are being caught on North, Chardons and Sunshine Reefs, the best baits have been live yakkas and slimies fished near the bottom. The reefs wide of Double Island Point, the Hard and the Barwon Banks have seen some larger snapper, Pearl perch, being caught. We are starting to see some solid Spanish and spotted mackeral being caught on live or pilchard bait floaters.

On the beach; Whiting and dart being caught along the gutters on the Northshore and the eastern beaches. Pippi’s and live worms producing most of the fish, good sized tailor around dawn and dusk from the Noosa Northshore with the area between Teewah and Double Island productive. Some good sized Jew have been caught at night on the beaches south of Peregian.

In the freshwater; Soft plastics fished amongst the weeds in Lake McDonald have been producing some good bass, yellowbelly are also on the chew try trolling around the main basin and weedy edges with lures like the Strada Dredge 70. The Bass have moved in Lake Borumba and are being caught along with saratoga around the sticks and the points of the Yabba arm on spinnerbaits.

The first ever Gone Fishing Day is this Sunday 16th of October 2016. This is a day when all Australians can get out on the water for a fish and celebrate our love of fishing. It doesn’t matter if you have never fished before, Gone Fishing Day is for everyone. So why not sign up for the biggest fishing event on the Australian fishing Calendar. Davo’s Tackle World have some great prizes and giveaways on the day so jump on line and check it out and register at https://gonefishingday.org/